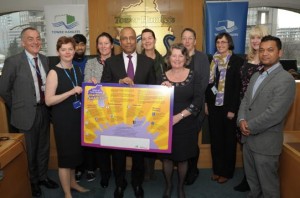 The Tower Hamlets Mayor’s Charter of Child Rights was launched this afternoon (Tuesday, March 11). Its launch represents a major milestone in the council’s new ground-breaking partnership with UNICEF UK, the world’s leading children’s organisation.
Local children and young people decided which 10 articles in the United Nations Convention on the Rights of the Child were most relevant to them. (See Notes to Editors below for the full list)
These have been used to produce a charter, which organisations that work with children and young people in Tower Hamlets will sign up to.
By signing, these organisations will be committing themselves to upholding all the articles of the UN Convention, and to pay particular regard to the 10 points deemed especially important by local young people.
Tower Hamlets Mayor Lutfur Rahman, who was the signatory on behalf of the council, said: “Tower Hamlets Council is delighted to be working with UNICEF UK on this vital project.
“We want Tower Hamlets to be widely known as a child-friendly borough. There is a lot of work to do but, thanks to the young people involved, this charter is a great step forward.”
The launch of the charter is the most prominent development in Tower Hamlets’ progress as part of the UNICEF UK Child Rights Partners programme, an initiative that aims to put children’s rights at the heart of public services in the UK.
At today’s launch, Tower Hamlets Council became the first organisation to sign the charter. Other organisations to sign at the launch included Bart’s Health NHS Trust, the Metropolitan Police, East London Foundation Trust and some of the borough’s head teachers.
Guests were also shown a video in which the young people talked about the importance of child rights.
UNICEF UK Director of Programmes Teresa Bergin spoke at the launch, which was held at the Town Hall and attended by dozens of children, young people and representatives from the public and voluntary sectors.
She said: “We are pleased to be working with Tower Hamlets as part of UNICEF UK’s Child Rights Partners programme and it is great to see the council putting this ground-breaking initiative into action.
“We believe that placing children’s rights at the heart of local government will transform services for the better and ensure all children have the same opportunity to flourish. This charter is a stepping-stone towards securing this ambitious goal for the children of Tower Hamlets.”
Each organisation which signs the charter will be given eye-catching posters to display in their buildings promoting to the public their commitment to upholding child rights.
The council will be working hard to ensure as many organisations as possible, which work with children and young people in the borough, sign up to the charter.
Cllr Oliur Rahman, the cabinet member for children, schools and families, said: “Child rights should always be at the forefront of the mind of any professional who works with children and young people, and this new charter will help ensure that this is the case.”
Police Borough Commander Dave Stringer said: “The implementation of this charter is the result of consultation and engagement with local children and is intended to improve the quality of any services provided to the young people of Tower Hamlets.”
Tower Hamlets Council is one of six local authorities to have partnered with UNICEF UK for the Child Rights Partners programme.
Each of the councils is running its own pilot project as part of the programme. Tower Hamlets Council chose to run its in partnership with the local Children and Families Partnership Board – a forum of local agencies working together to deliver on key priorities for children and young people.
As well as the Tower Hamlets Mayor’s Charter of Child Rights, other activities as part of Tower Hamlets’ project include:
Providers which submitted bids to provide a substance misuse treatment service, had to demonstrate how a child’s rights will be considered as equally as their need during the delivery of the service.
Forming a group of young commissioners. These young people have been trained in child rights and played an integral role in drawing up the charter. They helped to inform the council in deciding which bidder(s) for the Substance Misuse Service was successful.
All applicants for the Youth Opportunity Fund must demonstrate that they meet one or more of the child rights articles to be considered for a grant.