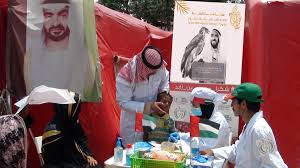 The campaign in Cox’s Bazar district, under the directives of Sheikha Fatima bint Mubarak — chairwoman of the General Women’s Union (GWU), president of the Supreme Council for Motherhood and Childhood and supreme chairwoman of the Family Development Foundation — uses mobile clinics and field hospitals to organize humanitarian volunteer programs to treat women and children.
Arjumand Banu, 36, brought her two-year-old daughter to the Hope UAE Clinic in Zamtoli, Ukia subdistrict of Cox’s Bazar.

“My little daughter Salma is suffering from diarrhea for the past two days. Every time she eats something, she throws up,” said Banu, a Rohingya refugee living in Kutupalang refugee camp.
“The lady doctor examined my daughter very carefully and prescribed medicine for her. I got the medicines for free,” she said as she left for her makeshift house in the nearby camp.

Like Banu, hundreds of Rohingya refugees are now receiving free medical treatment from Hope UAE Clinic, funded by the Sheikha Fatima Humanitarian Campaign of the UAE. The clinic offers quality medical and therapeutic services while the campaign organizes a youth forum to establish a culture of volunteer and humanitarian work with the help of young UAE and Bangladeshi volunteers.

It is a joint initiative of the Zayed Giving Initiative and the General Women’s Union (GWU) of UAE, in partnership with the Hope Foundation for Women and Children of Bangladesh, Dar Al-Ber Society, Sharjah Charity House, the Saudi-German Hospitals Group, Zayed Humanitarian Work Academy.

Sheikha Fatima Humanitarian Campaign has collaborated with the Bangladeshi nonprofit organization, Hope Foundation for Women and Children, and facilitated free medical services for the Rohingya refugees since December 2017.

“The number of patients in this health center is increasing with every passing day. Sometimes, we have to treat around 100 patients a day,” K.M. Zahiduzzaman, chief operating officer of Hope Foundation for Women and Children, told Arab News.
The Sheikha Fatima Humanitarian Campaign donates $10,000 a month to the health center to offer free medical care to Rohingya women and children.

“According to our contract with Sheikha Fatima Humanitarian Campaign, in the second phase we will receive an increased amount of $15,000 per month and we are expecting to receive this amount very soon,” Zahiduzzaman said.

With the support of two female doctors, another two nurse, and three midwives, a pharmacist and nine field personnel, the Hope UAE Clinic has already served more than 6,000 Rohingya patients in the past eight months.
To cope with the increasing pressure of Rohingya patients, a volunteer team of doctors from the UAE often assists the regular medical staff of the clinic.

To promote a culture of volunteering and humanitarian-giving among the youth, the UAE has launched a popular campaign under the slogan “Following the Footsteps of Zayed,” and the humanitarian initiative for Rohingya refugees in Cox’s Bazar is part of this campaign.