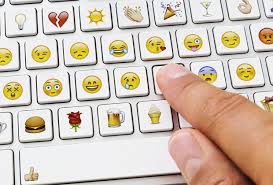 Intelligent Environments says its Emoji Passcode service is more secure because there are more potential combinations of the 44 emojis than there are of the numbers 0-9.
It claims some digital banks have already expressed interest in the idea.
Memory experts agree that people find it easier to remember images.
David Webber, managing director of Intelligent Environments, said the system was designed to appeal to 15-25-year-olds.
“Why can’t financial service be fun and innovative?” he said.
“It’s just another method of logging in.”
Mr Webber added that his company had not patented the idea.
“I don’t think it’s patentable. But I do think we are the first people to have thought of it,” he told the BBC.
Cybersecurity expert Prof Alan Woodward said that the use of patterns and images was already used by some firms as a useful alternative to remembering complex sequences of numbers and letters.
“I think this is an interesting and potentially valuable step forward,” he said.
“If we persist in using passwords, which seem to be here for a while yet, we need to recognise how humans think and make these as easy to remember as possible.
“The combinations and permutations present a would-be hacker with having to run through a number of cycles that is even greater than they do for so-called dictionary attacks.
“But I’m sure there are hackers who will work on breaking into these systems so I think it still makes sense to have some sort of two-factor authentication.”
‘Major flaw’
Former memory champion Michael Tipper told the BBC the technique for remembering a sequence of either numbers or pictures was essentially the same.
“Fundamentally we are hard-wired to remember pictures,” he said.
“However, people are lazy and they will adopt the easiest way through.
“Statistically it will be harder to crack – but if you’re presented with a screen of emojis and you can’t be bothered to remember a sequence you’re going to pick the ones in the four corners or the top row – and then you are left with an equally insecure technology.”
Mr Tipper argued that human behaviour could be a major flaw in the idea.
“I think what needs to happen is more rigour in terms of testing the behavioural aspect of this.” -BBC