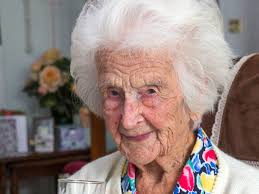 Born on 16 September 1906, Grace Jones of Broadway in Worcestershire has not only experienced the reign of five monarchs and 21 prime ministers, but is older than the invention of the perm, was three when Heinz cream of tomato soup was introduced to Britain and was the grand old age of 21 when the first “talkie”, The Jazz Singer, was released.

She has seen the outbreak and resolution of two world wars, and lived through the Russian Revolution, the sinking of the Titanic, and all three London Olympics.

Mrs Jones is not the first Grace, nor even the first Grace Jones to hold the title of oldest person in the UK – she shares her name with a former holder of the record, who died aged 113 in 2013.

The name with an equivalent pattern for boys is Jack. In 1906 the top name for boys was William, and although none of 1906’s top 20 names have disappeared, Harold, Reginald and Walter are among the least popular at the moment.