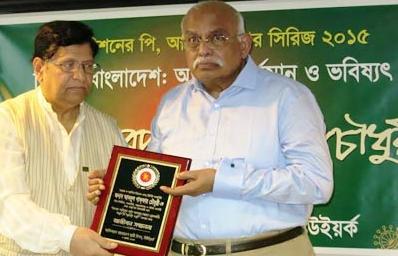 Well known pro-Awami League columnist Abdul Gaffar Chowdhury at a function at New York has said that, ‘US in danger by creating Taliban. It will be decline in future. US killed Saddam and Gaddafi to secure Israel’.
He made the comments at a seminar titled, “Bangladesh: Past, Present and Future” at New York on the 3rd of July hosted by Bangladesh Permanent Mission to the UN.
Criticism has been raised over comments by Abdul Gaffar Chowdhury saying that ‘the 99 names of Allah were the names of the ‘gods of Kafirs (unbelievers or pagans)’.
He also made comments criticizing the Arabic language and the veil.The comments have generated widespread criticism in the expatriate Bangladeshi community and amongst the online social media community as well.
Hosted by Dr. AK Abdul Momen, the Bangladesh Permanent Representative to the UN and the ambassador, Abdul Gaffar Chowdhury, a secular Bangladeshi columnist who writes regular columns and opinion pieces in favour of the ruling party the Awami League in Bangladesh, said, ‘The Arabic words we use today are all words which were used by the ‘Kuffar’, or the disbelievers before the advent of Islam, such as the 99 names of Allah- all were names of the gods of the ‘Kafirs’. Their language had words like Ar-Rahman, Gaffar, Gofur, et cetera. All these words were actually later adopted by Islam(!)’.
Making derogatory remarks about the ‘burkha’ and the ‘hijab’ he said, ‘This is the latest cultural involvement of the ‘Wahhabis’ in Bangladesh. I am surprised. They even expect class two girls to wear this! Can this be the teachings of a religion?’
Gaffar Chowdhury said, ‘Faith (religion) could be changed but ‘Bengali’ identity is unchangeable. Abdul Gaffar Chowdhury may be turned into Gawhor Ranjon Chakrabarti but ‘Bengali’ identity is fixed. He continued, We are using ‘Namaaj’, ‘Khuda Hafeej since seven hundred years. But what’s the reason to termed it as a ‘Salaat’, ‘Allah Hafeej’? Its invented by Wahhabism’.
‘Times have changed. Many in Bangladesh are against wearing the veil. Social movements need to be raised against this blind religious practice’ he added.
Confessing that he had a little early life education from a madrassah, he said, ‘There is a difference between Rasul (messenger) and Rasulullah (messenger of God) or Rasule-salam (messenger of peace). There are many who would call for my neck if I said that I was a Rasul (messenger). The collector of the largest number of Hadith, Abu Hurayra, means ‘Father of Cat’ and the name of Abu Bakr means ‘Father of Goat’. Those of the ‘Kafirs’ who converted later did not change their names’.
He made further remarks supporting Abdul Latif Siddiqui, the former Awami League Minister who had faced both nationwide and worldwide criticism for making derogatory remarks against Islam and the Prophet (pbuh), losing his job and being arrested temporarily as a result.
Gaffar Chowdhury, while making further comments on Islam in Bangladesh, said, ‘Wahhabism (fundamentalism) has made a lot of divisions between the Muslims. I believe that if Prime Minister Sheikh Hasina had strongly curbed fundamentalism with a strong arm, Bangladesh would have been destroyed. Even if she may have hundreds of faults and errors, she is the true symbol of secularism in Bangladesh today’.
Many in the audience stated that they felt extremely uncomfortable at the detour of discussion to the sensitive topic of undue criticism of Islam and its tenets.