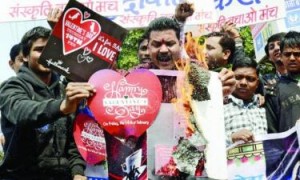 Anti Valentine’s Day protesters took to streets of cities in India and Pakistan on Friday, saying the observation of the day was anathema to their cultures and societies.
Police in Peshawar say two rival student groups have clashed at a university in the country’s northwest over celebrating Valentine’s Day.
Police official Raheem Hussain says Friday’s violence erupted at the University of Peshawar when dozens of students from a liberal group rallied in favor of the romantic holiday.
Their rally was taking place at the same location where conservative students had gathered to promote a “Modesty Day” instead.
In the Indian city of Indore, Bhopal, several Hindu activists from the Sanskriti Bachao Manch (Save Culture Forum) set fire to posters and greeting cards during a protest against Valentine’s Day on the eve of the celebration in Bhopal.