Nothing can stop you; once you would have the right intention, determination, dedication and honesty. You could overcome all the barriers which may take time but you will reach your finish line as a winner. Mfa Zaman has been awarded The Muslim News Al-Biruni Award 2018 for Excellence in Community Relation in the United Kingdom. Zaman; a man who has a real talent with vision and giving service to the communities around the UK to make it a better place. His achievements inspired many British to make a change through volunteer service.
Over 600 people have attended The Muslim News Awards for Excellence on Monday 23th March in The Grosvenor Square, London Marriott Hotel. This evening was an unforgettable celebration of Muslim talents and their contribution to the British society. The Minister for the Cabinet Office Hon David Lidington CBE MP, Shadow Justice Minister Yasmin Qurashi MP, Member of the House of Lords Baroness Sayeeda Warsi, Liberal Democrats spokesperson for exiting the European Union and International Trade Tom Brake MP, Chair of the Intelligence and Security Committee Dominic Grieve MP, Scottish National Party Westminster Leader Ian Blackford MP and others renowned guest, dignitaries had attended to inspire the Muslim talents and their contribution to British society. 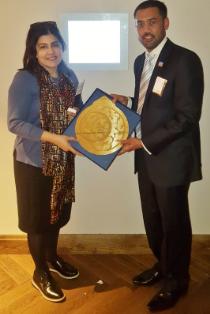 The winner of The Muslim News Al-Biruni Award; Mfa Zaman was the London Ambassador in London Olympic 2012 who has involved with charity & volunteer service for a number of years. After winning this prestigious award; Zaman said, I am really grateful to my Almighty Lord, who guided me towards right path and given me this opportunity to serve His creation. I feel really humble and honour to receive this award which will inspire me to carry on my service. I want to remember and show my gratitude to those special persons in my life who always hold my hand during my difficult time, help me with their best and motive me, give me hope that I can win.
Because without them; today I could not reach here. So they are part of my success. It is never ease when you give volunteer service to others because it is free while most people are running for the materialistic life; they count every second how to earn more for a better life but I have difficulties in my daily life; so I have faced criticism. But my intention and vision is to please my Almighty Lord; to serve Him with my best. As a Muslim in Day of Judgment when Allah will ask me what you have done for me while you were in this world? So I can give answer that I have done my best for You even it is less. Once upon a time I had nothing; I was a victim of the abused; even I don’t know what is going to happen next? I was homeless but never hopeless. I was trying my best to prove myself and stand on my own feet with honesty even very few people appreciated & supported me. Nothing happened over night; every day I learn and try to improve myself to make a better person. It is not ease while your every day is full of challenge but one verse of Surah Ar-Rahman in Al-Quran always inspire me to carry on my service where Allah said, So which of the favors of your Lord would you deny? While every morning while I wake up; it is a blessing; I can see, walk so I should give something back to those who doesn’t have those blessings. But most important thing to become successful is; to keep maintain time & commitment. Always I try to work with responsibility even it is volunteer work. Also we should learn to appreciate others and help them to make a change in their life through our experience. Because we have to be self-less if we want a better society. Before getting something; we first give to others with love, care.
The editor of The Muslim News Ahmed J Versi said, The awards ceremony showcases the many wonderful achievements of the British Muslims. They inspire and motivate us to excel, as well as celebrate these positive contributions to society as a whole. 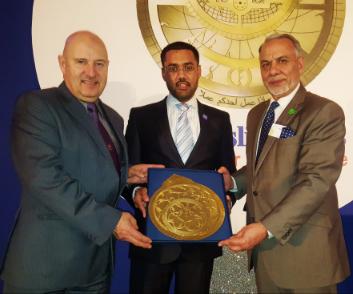 The Ambassador of London Olympic 2012; Mfa Zaman’s article & interviews have published around the UK which creates a positive vibe in British society. In Ramadan 2017; he participated in a national movement The Great Big Walk with Jo Cox Foundation & Eden Project. He walked 616 miles from Yorkshire to London while he was fasting to promote The Big Lunch. The Big Lunch is the UK’s annual get together for neighbours, an idea from the Eden Project and is supported by Royal Patron HRH The Duchess of Cornwall. As only a Muslim in the Great Big Walk; He walked to connect people and communities across the United Kingdom, encouraging everyday people to make positive change where they live. During 616 miles walk; he visited many community projects, charities and met with local MP, Mayor and Councillor. He especially met with volunteers to encourage them and share the idea to make a strong, better community. During walk Zaman became known for his infectious positivity and enthusiasm; when asked about his journey and his energy, he responds ‘I am still walking & fasting but I am still smiling’
During the Great Big Walk; Mfa Zaman was interviewed by BBC, ITV, Channel S, Islam Channel and local media. Also as a first Muslim Bengali he attended in the BBC One Show to share his journey.
In 2014 Zaman has been awarded Best Volunteer of The Year award by the international humanitarian charity Muslim Aid and in 2017 he has been nominated for the Calderdale Community Spirit of the year award. 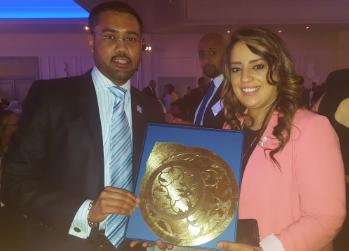 Mfa Zaman is an active volunteer who running his own project ‘I Am With You’ to help, feed the homeless. He is helping people from all race, colour and religion as a volunteer. He runs in London Marathon, Brighton, Birmingham Marathon and many half marathons to help the disabled kids who are involved with sports. The ECB cricket umpire Zaman was a volunteer in Rugby World Cup England 2015. He served the Volunteer Centre Lewisham as a Vice-Chairman, Trustee. He is a founder of Safe & Save, Community of Jews & Muslim. He is involved with Team London, Near Neighbours, Active Newham, Newham Cricket Club and Bart’s Health NHS Trust.
Zaman said, I remember those people who always support, encourage me to carry on my good work. Without them; today I am not able to achieve these. Also I appreciate The Muslim News for this award because it will inspire those who want to make a change in their life. So it does not end here; I would like to give my best service to make a difference. Mohammad Ali said, Champions are made from something they have deep inside them: A desire, a dream, a vision Take a risk today! Believe in yourself. Make a difference.