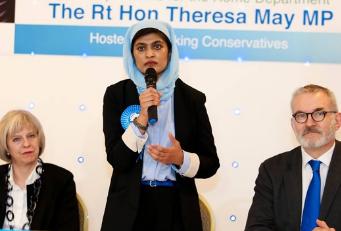 Home Secretay Theresa May MP has urged the voters to vote for Conservative party for the economical development and future security. She also said that Conservative Party believes in Value of Bangladeshis. It is working to reduce the misuse of tax payer’s money.  Conservative Party is trying to bring balance between people who are on social benefit, can have their benefit unhindered and people who work, have their full entitlement. It is trying to bring welfare to low and middle income families.
She urged the voters of Barking and Dagenham to vote for Mina Rahman to secure the future development of the area.
Theresa May said this in election campaign meeting recently held in support of Mina Rahman.  The meeting was conducted by GLA Member Andrew Boff.
Guests who were present in the meeting included Conservative leader Shahgir Bhakht Faruque, Honorary Vice President of CFOB Mukim Ahmed, Bajlur Rashid MBE, Shah Shahidur Rahman, Syed Hossain Ahmed, Richard Semitogo, community leader Gouyasur Rahman, Goyas Miah, Abdul Majid, Shaheb Khan, Abdus Salam Shofique Miah, former councillor Ahmod Hossain, Dolon Chowdhury, Helal Ahmed Chowdhury and others.
GLA member Andrew Boff said that as a resident of Barking, he is aware of the problem faced by the barking residents and he believes that Mina Rahman is the most energetic and appropriate candidate to resolve the issues faced by this deprived borogh.