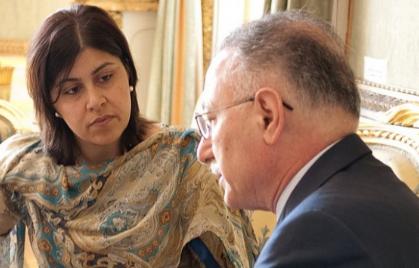 Ismail Patel:
Baroness Sayeeda Warsi’s resignation over Gaza highlights the hypocrisy in London supplying Israel with weapons while preaching ethics – and in her own party’s approach to a multicultural Britain
In politics, it is rare to see someone resigning from a powerful position on the basis of principle. In the UK, the most infamous examples were from 2003 – over a decade ago – when the late former foreign secretary Robin Cook and the former secretary of state for International Development Clare Short resigned in objection to the Labour Party’s role in the Iraq war.
Witnessing such an honourable feat from Baroness Sayeeda Warsi in recent days was a great surprise, and considered a heroic action by many who support the Palestinians and principled public figures. Warsi resigned her positions as senior Foreign Office Minister and Minister for Faith and Communities in protest at what she termed the government’s “morally indefensible” position on Israel’s attack on Gaza. Her decision has sent political shockwaves across all parties. The senior conservative peer’s announcement caught the public, political pundits and even Prime Minister David Cameron off guard.
The conservative allegiance with Zionism and the state of Israel is considered as well established. As a result, political pundits did not envisage any dramatic moves within the Conservative Party, let alone the cabinet. However, politics still has its surprises and the courageous and principled resignation by Baroness Warsi certainly keeps the flame of faith in politics flickering. With unambiguous support from senior conservatives Dominic Grieve and the Communities Secretary Eric Pickles, as well as the substantial backing from Andrew Mitchell and London Mayor Boris Johnson, her resignation has exposed the fissures within the Conservative Party regarding the Israel/Palestine issue. The assumed monolithic support for Israel within the conservatives is being challenged and it is hoped it will empower many more to voice their descent publicly.
How is it that Baroness Warsi came to the decision to resign over the issue of Gaza? As British people, we champion the ideal of upholding the rule of law and attaining justice to such a degree that we are accused of copyrighting them as an exclusive British value. In light of this, the failure of the British government to support the UN Human Rights Council Resolution on 23 June, 2014 to investigate suspected war crimes being committed by Israel in Gaza was not only an abject failure to uphold the rule of law but exposed the conservative government’s hypocrisy.
At home, the government routinely attempts to continually reiterate its ethical foreign policy to the public, while advocating this brand of Britishness globally. However, Britain is involved in supplying F16 fighter jet components, assault rifles, armoured vehicles and ammunition to Israel. The UK government issued military export licenses to Israel worth £7.8bn in 2013, although this figure is much higher than previous years due to export of equipment that the Israeli government claims is for Israeli civilian infrastructure. This supply contravenes the UK’s international commitments based on principles that arms sold from the UK will not be used for internal repression, abuse of human rights, provoke or prolong armed conflicts, aggravate existing tensions in the destination country or be used aggressively against another country. This selling of arms to Israel falls short of the UK government’s own standards and exposes the ethical policies merely as verbal mantra.
This inconsistency and the dire consequences for the Palestinian people resulted in Baroness Warsi’s decision to resign. The resignation has highlighted why the Conservative Party have not really managed to shake off the “nasty party” image.  Baroness Warsi came under immediate attack from some quarters of her conservative colleagues following her resignation, and their criticisms ranged from religious to racial issues.
She was falsely accused of never having championed Christian minority issues and some pundits including Michael Fabricant MP suggested that her resignation was because Gaza is “a Muslim issue”. It appears that by reducing it to a “Muslim issue”, Baroness Warsi’s resignation becomes negligible, and only proves that conservatives can never trust a Muslim. This compartmentalisation of the issue makes it more palatable for conservative MPs to dismiss, rather than viewing it in its correct light, as a deeply distressing humanitarian issue.
Such reactions appear to reflect highly presumptuous assumptions which depict the level of anti-Muslim sentiment existing in the party. This element was further exposed a few days after Baroness Warsi’s resignation when the conservative’s election chief, Lynton Crosby, reportedly informed Cameron that he should ignore Muslim voters at the next general election since their vote will not be decisive. Political pragmatism aside, policies based on the search for naked votes consolidates the perception of conservatives as being bereft of principles.
While Cameron has failed to adequately respond to Baroness Warsi’s resignation concerns, the latter has received a hero’s welcome from the masses.  Having spoken at four venues around the country since her resignation, there is no doubt her popularity amongst those seeking justice for Palestine has rocketed.
Even the ardent socialists have to acknowledge her sacrifice. There is little doubt that for a female from an ethnic minority background to have achieved as much as Baroness Warsi has in the Conservative Party is tremendously laudable, and yet she then surrendered a cabinet post, and this is recognised as a great sacrifice irrespective of each individuals political convictions.
It seems apparent that her resignation has been a great loss for the Conservative Party as they have lost a genuine conservative from a segment of society that may indeed influence who forms the next government. It would also be foolhardy to write Baroness Warsi off from political life just yet, not least because she has a great deal more to offer but also as any future conservative government without her will be considerably ill-suited to govern a multicultural Britain.

–  Ismail Patel is chair of the Leicester-based campaign Friends of Al-Aqsa. His Twitter handle is @IsmailAdamPatel
The views expressed in this article belong to the author and do not necessarily reflect the editorial policy of Middle East Eye.