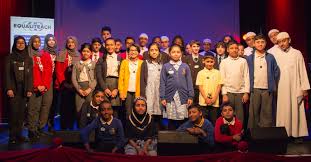 Children are taking action to stamp out Islamophobia in Tower Hamlets and are making it clear that their borough is no place for hate.
In a project that is the first of its kind to take place in schools, local children have produced and starred in two short films, where they shared their experience of discrimination, including women having their headscarves pulled off and other children not wanting to play with them.
In one production, primary school pupils call on the community to work together to overcome discrimination. One child said: “It’s good for everyone to be different so we can share our cultures.”
In the second film, secondary school students encourage people to report discrimination, support those being targeted and to educate and communicate with each other.
John Biggs, Mayor of Tower Hamlets, said, “As Mayor I am committed to tackling all forms of discrimination including Islamophobia. We want Tower Hamlets to be a place where everyone feels welcome and can live in peace, without facing discrimination.
“The Agents for Change Project plays a vital part in raising awareness of the impact of hate crime, and how to tackle it.”
Cllr Asma Begum, Deputy Mayor for Community Safety and Equalities, said, “It’s commendable to see young people taking action to help end Islamophobia. Hate crime and discrimination is unacceptable and we will not tolerate it in our borough.”
Tower Hamlets Council launched the No Place for Hate campaign in 2008. It has a dedicated team to support victims and help to hold perpetrators accountable. They supported the Agents for Change Project.
The 37 students from Tower Hamlets who were involved in the project were recently commended at an event at Rich Mix, Shoreditch. They were presented with awards as Agents for Change.
At the event, Samia and Tanaaz, Agents for Change from Swanlea School, said: “When you judge someone by their religion it doesn’t define them, but it does define you. Blowing out someone else’s candle doesn’t make yours shine any brighter. We all need to work to end Islamophobia.”