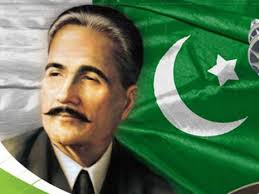 Although his main interests were scholarly, Iqbal was not unconcerned with the political situation of the country and the political fortunes of the Muslim community of India. Already in 1908, while in England, he had been chosen as a member of the executive council of the newly-established British branch of the Indian Muslim League.
In 1931 and 1932, he represented the Muslims of India in the Round Table Conferences held in England to discuss the issue of the political future of India. And in a 1930 lecture, Iqbal suggested the creation of a separate homeland for the Muslims of India. Iqbal died (1938) before the creation of Pakistan (1947), but it was his teaching that “spiritually … has been the chief force behind the creation of Pakistan.”
Iqbal joined the London branch of the All India Muslim League while he was studying Law and Philosophy in England. It was in London when he had a mystical experience. The ghazal containing those divinations is the only one whose year and month of composition is expressly mentioned. It is March 1907. No other ghazal, before or after it has been given such importance. Some verses of that ghazal are:
Your civilization will commit suicide with its own daggers.
A nest built on a frail bough cannot be durable.
The caravan of feeble ants will take the rose petal for a boat
And in spite of all blasts of waves, it shall cross the river.
I will take out my worn-out caravan in the pitch darkness
of night.
My sighs will emit sparks and my breath will produce flames.
Iqbal and the Quaid-e-Azam
Who could understand Allama Iqbal better than the Quaid-e-Azam himself, who was his awaited “Guide of the Era”? The Quaid-e-Azam in the introduction to Allama Iqbal’s letters addressed to him, admitted that he had agreed with Allama Iqbal regarding a state for Indian Muslims before the latter’s death in April 1938.
The Quaid stated: His views were substantially in consonance with my own and had finally led me to the same conclusions as a result of careful examination and study of the constitutional problems facing India and found expression in due course in the united will of Muslim India as enumerated in the Lahore Resolution of the All-India Muslim League popularly known as the “Pakistan Resolution” passed on March, 23, 1940.
Furthermore, it was Allama Iqbal who called upon Quaid-e-Azam Muhammad Ali Jinnah to lead the Muslims of India to their cherished goal. He preferred the Quaid to other more experienced Muslim leaders such as Sir Aga Khan, Maulana Hasrat Mohani, Nawab Muhammad Ismail Khan, Maulana Shaukat Ali, Nawab Hamid Ullah Khan of Bhopal, Sir Ali Imam, Maulvi Tameez ud-Din Khan, Maulana Abul Kalam, Allama Al-Mashriqi and others.
But Allama Iqbal had his own reasons. He had found his “Khizr-i Rah”, the veiled guide in Quaid-e-Azam Muhammad Ali Jinnah who was destined to lead the Indian branch of the Muslim Ummah to their goal of freedom. Allama Iqbal stated:
I know you are a busy man but I do hope you won’t mind my writing to you often, as you are the only Muslim in India today to whom the community has right to look up for safe guidance through the storm which is coming to Northwest India, and perhaps to the whole of India.
Similar sentiments were expressed by him about three months before his death. Sayyid Nazir Niazi in his book Iqbal Ke Huzur, has stated that the future of the Indian Muslims was being discussed and a tenor of pessimism was visible from what his friends said.
At this Allama Iqbal observed: There is only one way out. Muslim should strengthen Jinnah’s hands. They should join the Muslim League. Indian question, as is now being solved, can be countered by our united front against both the Hindus and the English. Without it our demands are not going to be accepted. People say our demands smack of communalism. This is sheer propaganda. These demands relate to the defense of our national existence.
He continued: The united front can be formed under the leadership of the Muslim League. And the Muslim League can succeed only on account of Jinnah. Now none but Jinnah is capable of leading the Muslims.
Matlub ul-Hasan Sayyid stated that after the Lahore Resolution was passed on March 23, 1940, the Quaid-e-Azam said to him: Iqbal is no more amongst us, but had he been alive he would have been happy to know that we did exactly what he wanted us to do.
But the matter does not end here. Allama Iqbal in his letter of March 29, 1937 to the Quaid-e-Azam had said: While we are ready to cooperate with other progressive parties in the country, we must not ignore the fact that the whole future of Islam as a moral and political force in Asia rests very largely on a complete organization of Indian Muslims.
According to Allama Iqbal, the future of Islam as a moral and political force not only in India but in the whole of Asia rested on the organization of the Muslims of India led by the Quaid-e-Azam.
The “Guide of the Era” Iqbal had envisaged in 1926, was found in the person of Muhammad Ali Jinnah. The “Guide” organized the Muslims of India under the banner of the Muslim League and offered determined resistance to both the Hindu and the English designs for a united Hindu-dominated India.
Through their united efforts under the able guidance of Quaid-e-Azam Muslims succeeded in dividing India into Pakistan and Bharat and achieving their independent homeland.
(Source: Iqbal Academy of Pakistan)