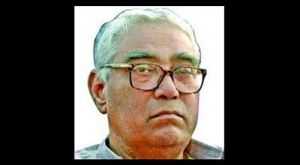 Senior journalist Gias Kamal Chowdhury died in a Dhaka hospital on Saturday morning. He was 74.
Chowdhury, a former President of Bangladesh Federal Union of Journalists and Dhaka Union of Journalists, had long been bed-ridden with ailing health.
The veteran journalist passed away around 5.30am in the capital’s Anwer Khan Modern Hospital, Syed Abdal Ahmed, general secretary of the National Press Club informed bdnews24.com.
Chowdhury started his career with the Dhaka Times in 1964 and later joined the Morning News. After independence, he joined the state-run news agency, BSS.
He was Dhaka correspondent of Voice of America (VOA). He was also the Editor of the daily Khabarpatra.
The former president of the National Press Club also worked at the Bangladesh High Commission in London.
Chowdhury was conferred ‘Ekushey Padak’ in 1992 for his contribution to journalism.