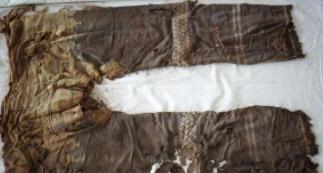 A recent excavation in western China has uncovered what is thought to be one of the oldest examples of trousers anywhere in the world, a new study has found.
The trousers are believed to be between 3,300 to 3,000 years old.
The excavation of the tombs in Yanghai graveyard in China’s Tarim Basin found two men and with them the item whose straight-fitting legs and a wide crotch are much like modern riding trousers, says a team led by archaeologists Ulrike Beck and Mayke Wagner of the German Archaeological Institute in Berlin. The findings published in Quaternary International, boost suggestions that Central Asian nomadic herders invented trousers to allow for freedom of movement when on horseback.