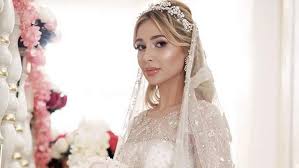 Ayna Dzabrailova, a student, got married to Haidar Sheripov, 26, a Chechen oil manager based in Moscow, in a lavish wedding attended by some 600 guests. Dzabrailova packed her gifts into designer bags and suitcases including Louis Vuitton, Etro and Versace, according to reports in Moscow that Mirror.uk quoted.

Niece of controversial tycoon, Umar Dzabrailov, Dzabrailova is said to have worn Britain’s Graff jewellery, wedding tiara from Dubai and two wedding outfits from Lebanese designers Zuhair Murad and Elie Saab. Moreover, ahead of the ceremony, Dzabrailova and her mother went on a shopping spree to Milan, Paris and Dubai.

Although the cost of Dzabrailova’s vast dowry is unknown, it is said that she received elite cosmetics besides other expensive wedding gifts. The wedding was held according to Chechen traditions with no alcohol served while the bride spent entire celebration standing, surrounded by her friends and sisters away from her new husband.

Dzabrailova and her family and friends drove in 25 limousines to an elite village in Moscow for the wedding. While the main party was held at upscale Safisa restaurant.

While two months ago, in another lavish wedding in the family, the bride had worn 45kg dress for which needed help going up the stairs while boarding her private jet to Moscow.

Dzabrailova’s uncle, Umar Dzhabrailov, 60, an ex-Moscow senator, was fined £5,800 last year for shooting a Yarygin pistol in the air. He was also interrogated by Russian secret services over the 1996 shooting of his American business partner, Paul Tatum, in a Moscow subway.