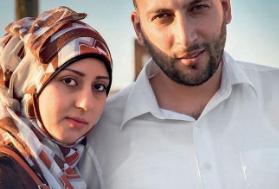 With no end in sight to the human suffering inflicted by the war in Syria, it can feel like there is never any good news. So when we heard of a young Syrian refugee couple who met, fell in love and got engaged via WhatsApp, we knew it was a story that needed to be told.
In the small house in the northern Jordanian city of Irbid, where Minear, 30, and Khoula, 21, live with their relatives, they welcome guests with typically generous Syrian hospitality. Despite having little to spare, they invite you to sit down to lunch together with Minear’s mother, grandmother and brother, and then ply you with cups of sweet mint tea.
Minear and Khoula, nestled close together on a large cushion, tell their story.
They grew up in the same neighbourhood of Dara’a City, in southern Syria, but had never met before their mothers introduced them in April 2014.
From opposite sides of the border, they agreed to speak on the phone.
“I wanted to get married, but my mum didn’t know many Syrian families here in Jordan,” Minear explains. “She had a friend she used to work with in Dara’a who had a daughter. She told me she was a university student, beautiful and said ‘I will ask about her’.”
At the time, Minear was a refugee in Jordan and Khoula was still in Syria with her family. From opposite sides of the border, they agreed to speak on the phone. “He introduced himself to me and asked, ‘Is anyone forcing you to talk to me?” Khoula remembers. “I told him, ‘No, my dad gave me the freedom to choose what I want.’ ”
Minear says he was immediately enchanted by her voice, but with the phone lines constantly being cut off, they had to rely mainly on Whatsapp and Viber messaging to stay in touch, with Khoula connecting to a neighbour’s WiFi.
They chatted about anything and everything, and would also send each other photos of what they were doing, although in Khoula’s case only after some gentle persuasion.
“It took me days to convince her to send a photo,” Minear jokes. “The connection was slow, but she was even slower!”
Asked what it was like to conduct a courtship by messenger, Minear says it was frustrating when the connection went down, but persistence and honesty were vital. “I didn’t care if it was Whatsapp, Viber, Facebook or whatever; I just wanted to talk to her. But if you’re trying to fall in love and get married without even meeting, above all you have to be honest about your feelings.”
Khoula’s main concern was more practical. “I always had to make sure that I had some spare credit in case it ran out in the middle of the night – so he wouldn’t worry about me,” she says.
They soon decided to get engaged, but being separated by a war zone they had no idea how or when they might actually get married. “I didn’t know how I could bring her to Jordan, so we talked about meeting in Syria or Turkey,” he says. “We even discussed the possibility of breaking off the engagement. But if you really believe and have patience, you can make it happen.”
Things finally came to a head when Khoula told Minear she was planning to move with her family to Turkey. Worried that they would never be together, he asked his prospective father-in-law to draw up a marriage contract and started making preparations to bring Khoula to Jordan. When it came to negotiating and agreeing on the contract, they relied largely on Whatsapp, he said.
After an initial failed attempt, Khoula finally made it to Jordan in October 2014, and was met at the airport by an excited Minear. “It’s the person you’re going to spend your life with, who you love despite never having met her,” he says. “So it was a very good feeling.”
They married shortly afterwards during a small, traditional ceremony at the house in Irbid, joined by a few dozen family members and close friends. They are expecting their first child – a girl – soon.
Minear still can’t quite believe that they made it. “It was something impossible, but it happened.”
While we talk, Minear plays with a small, colourful parrot, named Bulbul, that he and Khoula found abandoned in a cage during one of their regular evening walks around the neighbourhood. I ask what kind of parrot it is, and can’t help wondering if they’re pulling my leg when he tells me it is a species known as Fischer’s lovebird (a quick internet search confirms the delightful truth).
Set against all the tragedy and broken dreams the conflict has inflicted on millions of lives, their happiness feels like a small but significant victory.
Looking back, Minear still can’t quite believe that they made it. “It was something impossible, but it happened,” he said. “Some days were very difficult, but if you are patient and you really, really want it, in the end it will come to you. Maybe it’s also something beautiful during the crisis.”
(The writer works for UNHCR in Amman, Jordan).
Source: UNHCR – Voices for Refugees
A VOICE FOR THE DISPLACED
UNHCR launched “Voices for Refugees”, an online campaign, to mobilise support for internally displaced people and refugees in the Middle East and North Africa (MENA) by local communities. The campaign goes beyond compassion and solidarity; it also aims to offer that much-needed hope and support for refugees. To support the campaign, please visit Voices for Refugees and sign up to become a Voice.