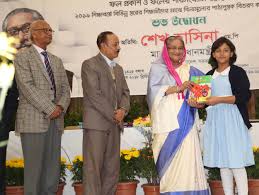 Prime Minister Sheikh Hasina has inaugurated the free textbook distribution among primary and high-school for the upcoming academic year on Monday morning.

The premier handed over government sanctioned books to some students at an event held at Gonobhaban, the official residence of the PM.

PM thanked everyone involved in the process for completing the book distribution on time. This is the 10th time the Awami League government distributed free books among school children.

As per government directions, 35 crore 21 lakh 97 thousand and 882 books will be distributed among registered 26 lakh 19 thousand 865 students all across the country through festive events on the first day of the new year.

Till now, the ruling government has distributed almost 261 crore free textbooks to students in primary, secondary, madrasa and technical boards in the last 9 years.

On the other, the Oikyafront had written to the Election Commission on Sunday urging steps to stop the book distribution.

In a letter sent to the Election Commissioner, Oikyafront chief Dr Kamal Hossain had said that the book distribution will enhance the image of the state head ahead of the election, which is a breach of the electoral code of conduct.