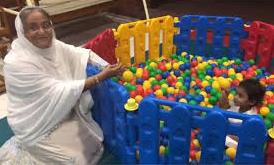 Prime Minister Sheikh Hasina spent her Friday evening with Shakib Al Hasan’s daughter Alaina Hasan Abri.
Umme Ahmed Shishir, wife of the ace all-rounder, posted photos of the Premier with their daughter on social media Facebook Friday night.
In the caption, Shishir wrote, “Alayna spent some good quality time with our honourable prime minister today! Such an awesome motherly and caring person she is.”
The photos took literally minutes to go viral on social media and people were drooling over the cuteness of the photos.
The photos show PM Hasina showing the two-year-old colourful fish in aquariums, showing her something in a mobile phone, playing with colourful balls and a smiling Hasina carrying the child.
Invited by the PM, Shakib went to Ganabhaban with his family. He is also seen standing next to the PM in two of the photos.