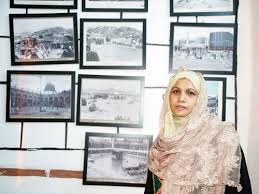 A Saudi woman in her 40s makes history by taking as many as 500,000 photographs of the Two Holy Mosques and the holy sites within a span of 12 years.
Susan Iskandar can rightly be called as an ‘ambassador of the Two Holy Mosques’ by disseminating their sublime message all over the world through her unique photographs that were showcased at numerous photo exhibitions and galleries.
She offers the viewers, belonging to all faiths, an opportunity to have a glimpse of the Grand Mosque in Makkah, Prophet’s Mosque in Madinah, and the current phase of their expansion, as well as into the holy sites of Mina, Arafat and Muzdalifah and the ongoing massive development works, the Saudi Press Agency reported.
Iskandar is currently displaying 80 photographs picked from her albums at the Ramadan festival (Ramadanuna Kida 2) in the Jeddah’s Historical Area. For Iskandar, photography is more than a passion since childhood and she started taking snaps at the age of 9.
In the latter phase, what differentiated her from other photographers was her passion blended with some sort of spirituality that eventually led her to focus on giving a visual treat to the people around the world about the Holy Mosques.
Iskandar is delighted to say that some of these pictures were instrumental in guiding some people into the fold of Islam. “It was fabulous that one Chinese citizen reverted to Islam after watching the photographs of the Holy Kaaba and the Grand Mosque when I displayed them at a photo gallery in a foreign country.”
The photographs she displayed at the Ramadan festival included some aerial ones that she took during daytime and night by using three professional cameras. These photos speak volumes about the holy sites and the massive expansion and development works. They also tell about the immense contributions and services rendered by King Salman and his predecessors King Abdullah and King Fahd after assuming the title of ‘Custodian of the Two Holy Mosques.’
There is an unmatched stamping of her talent in photography in each one of these pictures, especially the latest photos of the ongoing largest ever expansion of the Grand Mosque as well as the exclusive photos of the Holy Kaaba and its keys, the Black Stone (Hajar Al-Aswad), Maqam Ibrahim (the Station of Prophet Ibrahim) and humanitarian aspect pertaining to the Haj pilgrims.
The Union of Arab Sports Photographers honored Iskandar at its session held in Morocco in recognition of her superb talent as was evident in a three dimensional visual treat depicting the pictures of Two Holy Mosques with King Salman in the middle. -Saudi Gazette