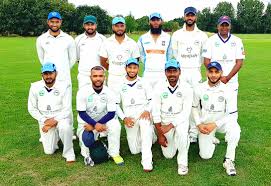 THCC secured another win against SKLPC in Middlesex Championship League. THCC invited opposition to bat first on a cloudy Saturday afternoon and THCC bowlers took full advantage of the condition to get them all out for only 136. Veteran left arm spinner Shumon Sharif took 3 wickets in his allotted 9 overs conceding only 14 runs. Kabir Miah took two wickets along with Mabs Alam and Ifthakar Ahmed took 1 each.

Chasing the set target of 136, THCC lost few early wickets to put themselves under pressure. Foysol Ahmed and Ishaq Shawn gave them a steady partnership in the middle to secure 4 wickets win against SKLPC. Ishaq Shawn remained not out 51 which includes 10 fours and a huge six on the on side.

THCC’s first XI skipper Shakeel Ahmed said, “Boys worked really hard throughout the day to secure the win under adverse weather condition, this win gave us the motivation to win the remaining games of the season.”