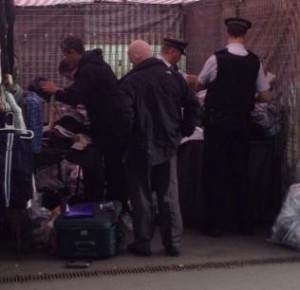 Around 140 police officers are carrying out raids in Whitechapel this afternoon as part of a “pre-planned” swoop by the Met.
The operation, at Whitechapel Market, is targeting stolen goods, according to police.
A Met spokesman said: “They are crime related raids. Officers are busily working in Whitechapel Market as part of a pre-planned operation to search for stolen good and arrest anyone handling stolen goods.”
Police denied reports on social networking sites that the raids were related to immigration and were being carried out by the UK Border Agency.
Twitter user @misterollie wrote: “All the market stalls in Whitechapel are getting turned over by police. It’s a scene.”
Another, @inmywindow tweeted: “Arrests happening in whitechapel raids outside ideas store #ukba #gohome I can’t help as I’m trapped doing work.”