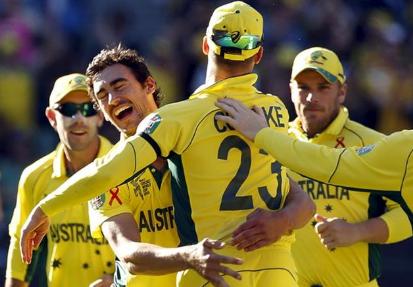 Australia are cricket’s new world champions. The hosts beat New Zealand by seven wickets in the final at the Melbourne Cricket Ground to win the World Cup for the fifth time and send their retiring captain Michael Clarke out as a winner.
Australian bowlers Mitchell Johnson and James Faulkner captured three wickets each as the home side skittled New Zealand for 183 in 45 overs.
Grant Elliott top scored for the Black Caps with 83 but New Zealand’s hopes of winning the World Cup for the first time were dealt a savage blow when their captain Brendon McCullum was bowled for a duck in the first over of the day.
Australia reached their victory target in the 34th over for the loss of just three wickets.
Clarke, who announced before the match that he was retiring from ODIs, guided his team to victory with a sparkling 74, departing to a standing ovation with Australia nine runs away from victory.
Steve Smith, his likely replacement as Australia’s next captain, hit the winning runs and finished not out 56 in front of a record crowd of 93,013.
Australia previously won the World Cup in 1987, 1999, 2003 and 2007. No other country has won the tournament more than twice.
Scorecard:
New Zealand 183 all out in 45 overs (Elliott 83, Johnson 3-30)
Australia 186-3 in 33.1 overs (Clarke 74, Henry 2-46)