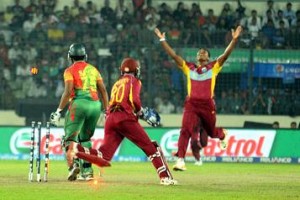 Bangladesh lost by a big margin of 73 runs against  the West Indies at Mirpur, owing to poor batting and poor fielding. After the Tamim Iqbal, Anamul Haque and Shakib Al Hasan were out early for poor shot selection, Mushfique and Mominul offered short-lived hope.
However, things began to slide for the Tigers after from the tenth over. Mominul, Sabbir, Mushfique and Mahmudullah were dismissed in the 10th and 11th over.
For West Indies, the match seemed at hand with a big margin after their batsmen posted a big total of 172 runs, helped by poor fielding of the Tigers. Bangladesh all out for  98 runs after the 19.1 overs.
Earlier, West Indies opener Dwayne Smith scored a magnificent 72 from just 43 deliveries to help his side reach 171. Bangladesh fielders dropped numerous catches and ground fielding was shockingly poor.