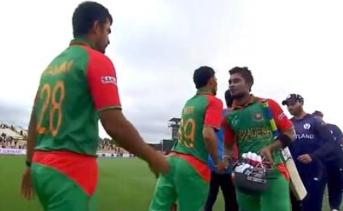 Bangladesh qualified for the ICC Champions Trophy 2017 in England as they beat India by six wickets in the second of the three-match ODI series against former world champions, India at the Shere-e-Bangla National Stadium in Mirpur, Dhaka.
The win ensured a first-ever series win for Bangladesh over India, as they took an unassailable 2-0 lead over India.
Bangladesh pulled off a historic six-wicket victory in the rain-shortened second One-Day International (ODI) against India at Dhaka on Sunday. After Mustafizur Rahman routed India with a six-for, an all-round batting performance from the Bangla batsmen ensured their maiden ODI series victory over India.
As ICC had earlier stated that the top eight teams, till the date of September 30, would only qualify for the event. Bangladesh’s series of wins against Pakistan and India have allowed them to take the eighth spot and have confirmed their spot of the big tournament a couple of years later.