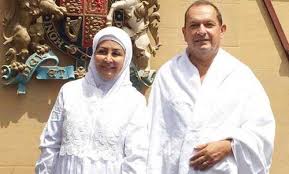 The British ambassador to Saudi Arabia completed his Hajj pilgrimage this year after accepting Islam in 2011.
Simon Collis is believed to be the first British ambassador to perform the holy pilgrimage.
He was photographed at Makkah wearing the white robe known as the “ihram” traditionally worn by pilgrims.
Collis was pictured alongside his wife Huda Mujarkech in photos posted to Twitter.
He has since revealed he became Muslim shortly before their marriage in 2011.
Saudi Arabian writer Fawziah Albakr posted the photos to Twitter. She wrote in Arabic: “First British ambassador to the Kingdom undertakes the Hajj following his conversion to Islam. Simon Collis with his wife Huda in Mecca. Praise be to God.”
Mr Collis tweeted in Arabic that after living among Muslims for thirty years he had accepted Islam prior to his marriage.
Well wishers tweeted their congratulations to Mr Collis and his wife, to which he replied “Thank you and Eid Mubarak”.
The UK ambassador has been based in Riyadh, Saudi Arabia’s capital, since 2015.
He has previously been posted to Syria, Iraq, India, Qatar, UAE, Tunisia and Yemen.