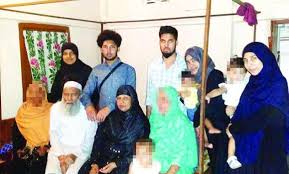 A family of 12 from Luton who were feared to have joined Daesh has released a statement to say they are now in Syria — and urged other Muslims to do the same, Daily Mail reported.
The Mannan family, which includes a one-year-old and two grandparents, had not been seen since visiting their home country of Bangladesh on May 17.
Abdul Mannan, 75, his wife Minera Khatun, 53, their daughter Rajia Khanom, 21, and five sons all went off the radar.
Police investigating their disappearance feared they had crossed into Turkey which borders Syria.
“We release this statement to confirm that indeed we are in Daesh,” a press release which surfaced from the Mannan family said.
Among the family are three unnamed children aged between one and 11 but the sons are Zayd Hussain, 25, Toufique Hussain, 19, Abil Kashem Saker, 31, Saleh Hussain, 26, and the fifth is also unnamed.
Abil Kashem Saker’s wife Sheida Khanam, 27, and Saleh Hussain’s wife Roshanara Begum, 24, and two unnamed grandchildren are also missing.
It recently emerged that police raided the family home and one member was stopped from getting on a flight at Heathrow the day they departed for Bangladesh.
Friends of grandfather Mannan fear they have been tricked into crossing the border into Syria.
Also on Saturday, lawyers of Kadiza Sultana, Shamima Begum and Amira Abase, the teens who traveled from Britain to Syria sparking criticism of the police response, said that the girls have married Daesh fighters.