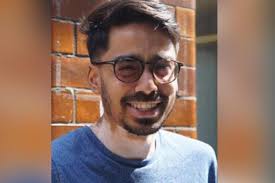 Charity worker Abdul Samad, 28, stumbled to the front door of his block and buzzed for help after he witnesses said he was attacked in the street for his mobile by thugs on a moped.
His devastated brother, Abdul Ahad, told how his parents rushed to help him as he lay fatally injured outside his home in Little Venice.
He was taken to St Mary’s Hospital in Paddington, where he was born, but died an hour later.
Mr Ahad told  Mr Samad worked for charity Dragon Hall Trust helping young Londoners develop their computer skills.
He said: “He loved helping children. That’s the sort of person he was. This is a young life gone and such a lovely life. He was full of energy and loved the kids he worked with.
“You’re not going to find a nicer person. It was over a phone, it’s just so senseless.
“He came to the door here and buzzed and was covered in blood. The knife went through his heart.
“He pressed the buzzer and my mum and dad came down and he was lying there on the floor. My mum then called me and said ‘you’re brother is dying’.
“When I got here he looked half dead already.”
He added: “My brother has never done anything wrong and never been in trouble with the police.
He told how the parents of Mr Samad, who studied economics at the University of Westminster, originally settled from Bangladesh in the 60s in search of a better life for their children.
He had been at a friend’s house playing computer games before leaving because he had work early today.
However, the family said witnesses saw Mr Samad being approached by youths on a moped outside his flat in St Mary’s Terrace, who tried to steal his iPhone 7.
It is thought he may have been stabbed during a struggle at about 11.45pm last night. He was pronounced dead in hospital just before 1am this morning.