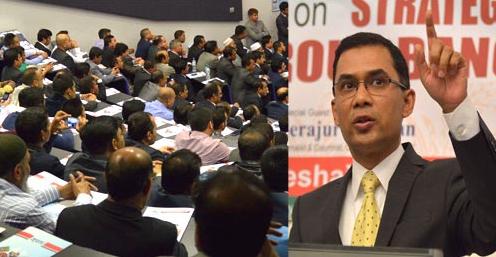 BNP senior vice chairman Tarique Rahman has said, The people who plotted to kill Mujib were present at Moshtaq’s ceremony. These very people are now hanging around Sheikh Hasina.
The BNP senior vice chairman made the remarks at a discussion titled ‘Strategies for Prosperous Bangladesh’ at London’s Queen Mary University on Sunday.
About Prime Minister Sheikh Hasina’s recent comments Tarique Rahman said, “She recently called Khandaker Moshtaq Ahmad a disgrace in connection with the Aug 15th assassination,” said Tarique and claimed present ministers Hasanul Haq Inu and Rashed Khan Menon, as well as Col Abu Taher, were present when Moshtaq was being sworn in as president after Mujib’s killing.
“They are more than a family of killers … they are a curse on Bangladesh,”said Tarique Rahman.
He said, So can we not call Awami League a disgrace by Hasina’s own standard? She is a disgraced leader of a disgraced group. The Awami League is totally a party of ‘Kulangars’ (disgraceful people).
“How sick must one be to embrace the killers of one’s own father just for the sake of power?” he asked.
He claimed the Awami League leaders had slaughtered each other for power in 1975.
“The BNP didn’t exist then, and Ziaur Rahman was at that time far away from these incidents,” said Tarique of his father.