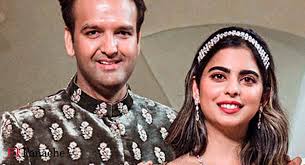 Bollywood stars Deepika Padukone and Ranveer Singh were all smiles and were twinning in white as they left for Italy for their wedding in the picturesque Lake Como on November 14-15. This grand event is to be followed by the wedding of Priyanka Chopra and Nick Jonas who are reportedly getting married at Rajasthan’s Mehrangarh Fort in December. The two got engaged in August in a traditional ceremony at her residence in Mumbai.

The list is not over yet, as the daughter of India’s biggest business tycoon is on the cards. Isha Ambani and Anand Piramal – both scions of the Ambani and Piramal business families will get married in Mumbai on December 12

According to a report in the Hindustan Times, their wedding invitation also gives new meaning to the word magnificent as can be seen from videos on social media. Each invitation cost Rs300,000.

The wedding invitation is encased inside a beautifully designed box with Isha’s and Anand’s initials on top of it. Inside the box is a book-like invitation accompanied by a letter written by the future bride and the groom along with an itinerary of the wedding functions. There are also four other boxes containing gifts for the people receiving the invitation.

During the weekend prior to the wedding, the Ambani and Piramal families will host their friends and family in Udaipur, where they are partnering with artisans and craftsmen to integrate local culture and traditions into the festivities.

Anand and Isha have been long-time friends and both the families have known each other for over four decades.