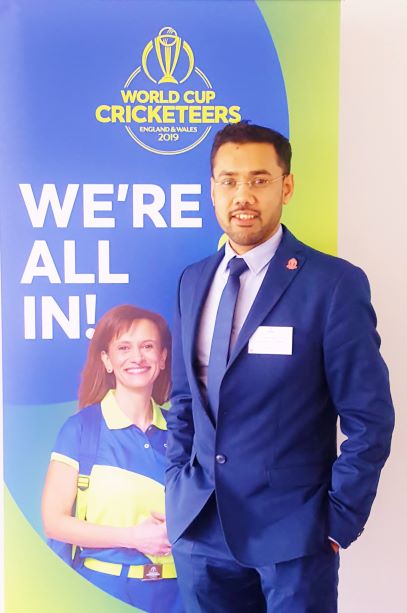 In 2019, The ICC Cricket World Cup returns to England for the first time in 20 years. With over one million people expecting to attend matches and World Cup activation in England and Wales this summer.
Mfa Zaman became part of The ‘World Cup Cricketeers’ in ICC Cricket World Cup 2019 which is the world’s biggest cricket event. London Olympic 2012 Ambassador Zaman is also a Selector in the Selection boardto choose volunteers from around the world for this most prestigious cricket tournament.
The ‘World Cup Cricketeers’ as they will be known, will make up 4,000 volunteers who will be the faces of the international tournament, welcoming fans and cricketers from around the world to England and Wales when the ICC Cricket World Cup returns for the first time since 1999.
Volunteering gave the opportunity to Ex-homeless Zaman to make a positive impact on his life. He was part ofthe London Olympic 2012 and Rugby World Cup 2015 England. ICC Cricket World Cup 2019 published a special article on Zaman for his dedication to volunteer service which inspired many people around the world. Already he has played a key role as a Selector to select volunteers from around the world for this big event of world cricket. More than 20,000 people showed interest, 10,000 applications received and 6,000 applicants interviewed for the 4,000 volunteer roles.
As Team London Ambassador of the Mayor of London, Zaman said, ‘’It is a dream for me to be part of the ICC Cricket World Cup after the London Olympic and the Rugby World Cup England. Being a genuine volunteer, it transformed my life while I had no way to stand on my own feet. Volunteering helped me to find a way out from a hopeless life with difficulties and stress by giving new skills, confidence and vision. Volunteering is my passion and it has helped me in so many ways. 10 years ago I was homeless and unsure about my next step, and volunteering gave me a golden opportunity to make a positive impact on my life. I had nothing, even no shade on my head and no support. But I never gave up because I was confident that if I got a chance than I will reach my vision. Since my story was published by ICC Cricket World Cup, many people and friends know my story to overcome adversity and achieve my goals which will hopefully inspire and motivate others around the world.

In 1999 as a school boy I watched the Men’s Cricket World Cup in England and 20 years later it is amazing to think I am part of this international tournament. It is a big honour for me to help as a Selector where I select the most dedicated volunteers who are experienced, enthusiastic and passionate. The selection board worked hard to choose the right people to create a memorable event. My dedication to volunteer services brought a huge positive impact in my life and helped me to integrate into British society. Now it is time to give back to volunteering service with my experience.’’
When asked what constitutes a good volunteer Zaman said, ‘’It is important to maintain time, ethics, value and a positive attitude. Nothing is easy but it is possible when the intention is clear and honest. Also there are many reasons for people not to volunteer. Volunteering has an image problem, particularly with young men and older people. Our youth think volunteering is only for retired people with time on their hands, financial issues, or they can’t spare the time or don’t know anyone who helps them to involve in volunteering. And for older people, the barriers are health problems, lack of transport facility, or caring responsibilities such as looking after partners or grandchildren. So the voluntary organisations, local councils and charities should promote the value of volunteering and provide help, training and support. It will encourage them to involve in volunteer service, which has beneficial effects for all. For both sides, we need to keep the balance. Let’s offer opportunities based on the needs and interest of potential, genuine volunteers; rather than on the needs of the organisation managing them’’.
ICC Cricket World Cup will begin on 30th May Thursday at The Oval and the final match on 14th July Sunday at The Lord’s Cricket Ground. Across 11 host venues and cities the volunteers will play a key role in the delivery of the 6 week tournament with a range of roles including spectator services, transport, broadcast & media, accreditation and hospitality.
Mfa Zaman has been awarded for his dedicated volunteer service by The Faith & Belief Forum 2018, The Muslim News 2018, Muslim Aid 2014 and nominated for an award by The Calderdale Community Service. The founder of ‘Safe & Save’, Zaman is a qualified ECB cricket umpire. He was the first Bengali Muslim to be interviewed by the BBC One Show where the world’s most famous personalities have featured. Also ‘Safe and Save’ has been covered by BBC and other media services. He ran in the London, Brighton & Birmingham Marathons and many half marathons to help the disabled kids who are involved with sports. His runs were promoted by world famous cricketers such as Sir Garfield Sobers, Sir Viv Richards, Sir Clive Hubert Lloyd, Gordon Greenidge MBE, British athlete Daley Thompson MBE, David Hemery CBE, David Weir CBE, Katherine Grainger DBE, Andy Barrow, Shelly Woods &British comedian Russell Brand. His articles were published in various organisations which motivate & inspire many to make a positive change in life and give service as volunteers. He served the Volunteer Centre Lewisham as a Vice-Chairman. Also he is an Ambassador of Mayor of Croydon, Cllr Humayan Kabir.He is involved with Team London, Near Neighbours, Active Newham, Newham Cricket Club & Bart’s Health NHS Trust.
Zaman became the most fortunate person because ICC Cricket World Cup 2019 published a special article on his journey and dedicated volunteer service which inspired many of people around the world to become involved in volunteer service and to make a positive vibe in life. Link – https://www.cricketworldcup.com/news/en/1082418 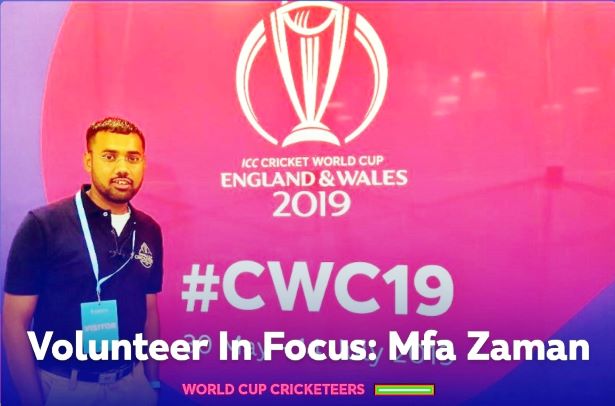