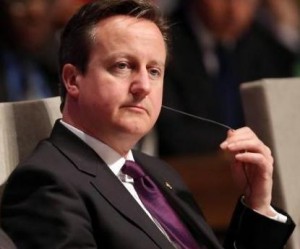 British Prime Minister David Cameron said on Monday there will be no G8 summit in Russia this year.
“We should be clear there’s not going to be a G8 summit this year in Russia. That’s absolutely clear,” Cameron told British television.
Meanwhile, Ukraine’s fledgling government ordered troops to retreat from Crimea on Monday, ending days of wavering as Western leaders tried to present a unified response to Russia’s increasingly firm control of the peninsula.
Russian forces have been systematically seizing Ukrainian ships and military installations in Crimea, including a naval base near the eastern Crimean port of Feodosia, where two injured servicemen were taken captive on Monday and as many as 80 were detained on-site, Ukrainian officials said.
With the storming of at least three military facilities over the past three days alone — and the decision by some to switch to the Russian side — it wasn’t clear how many Ukrainian troops remained on the peninsula. The former chief of Ukraine’s navy, who was charged with treason after he swore allegiance to the Crimean authorities and urged others to defect, was named a deputy chief of Russia’s Black Sea Fleet.
Ukraine’s acting president, Oleksandr Turchnynov, whose new government has struggled to maintain control and cohesion, said the Defense Ministry was ordered to withdraw all servicemen in Crimea to Ukraine’s mainland.