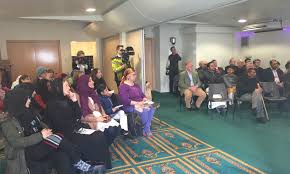 Khadiza Shahid spoke to non-Muslims who visited East London Mosque on Sunday as part of Visit My Mosque Day. They told her that the experience changed their perceptions about Muslims and helped break down barriers between communities.
The young local woman could have passed as just another Muslim. Dressed in loose western attire, Nyree Scales agreed to East London Mosque’s request to cover her hair with a maroon scarf as she entered the main prayer hall to satisfy her curiosity to learn about Islam, having regularly heard the mosque’s call to prayer.
She listened attentively as the tour guides explained the layout of the hall and how the prayer was performed in congregation during which worshippers from all walks of life stand shoulder to shoulder regardless of race.
With countless opportunities to pose questions, Nyree confidently enquired about Muslims’ belief in jinns. Her tour guide Juber Hussein explained that Muslims believe in the existence of spirits or supernatural creatures that cannot be seen, quite like those portrayed in the movie Paranormal Activity.
While Nyree did feel she had some preconceived ideas about Islam, those preconceptions disappeared as she left the mosque.
“Much of the media representations don’t seem to be true to reality. I’ve noticed more hostility elsewhere than here [in Tower Hamlets]”, she said. “What the British assume is that Muslims are an enclosed group and outsiders aren’t pure. This event proved otherwise. I thought it wouldn’t be as great for me because I’m a woman but the Muslim women I’ve met here are strong. They showed that the concept of the submissive wife isn’t accurate.”
Visit My Mosque Day
Distilling such misconceptions was the purpose behind the Muslim Council of Britain’s efforts to facilitate open days across Britain under the banner “Visit My Mosque”.
East London Mosque, one of the largest mosques in the country, was among 90 mosques across Britain to invite the public through its gates in a bid to increase awareness and educate people about Islam. The mosques offered talks, videos, tours and the chance to watch Muslims pray.
Approximately 30 000 people walk through the mosque each week, which can hold up to 7,000 worshippers at any one time. East London Mosque is part of a huge complex, providing services alongside the London Muslim Centre and the Maryam Centre. The new facilities of the Maryam Centre have increased the prayer capacity for women, allowing nearly 1,000 women to attend the weekly Friday congregation for Jummah. Altogether, the sites provide educational, religious, community and social welfare services.
Launching its open day at 11am, East London Mosque received about 100 people within a couple of hours. Throughout the whole day, over 250 people took the initiative to visit the mosque. The institution welcomed groups of visitors with refreshments before inviting them to a presentation on Islam’s basic tenets as well as a video about the mosque’s history, which spans over a century.
Quotes from the Prophet (saw) and also Malcolm X’s famous statement about hajj were on display. Translations and copies of the Quran were made available for visitors’ perusal.
Although the Muslim Council of Britain coordinated the national event to give an opportunity for mosques to provide the public an insight into the faith “beyond hostile headlines,” one of the imams was keen to emphasise that East London Mosque has been holding regular open days even pre-9/11.
Shaykh Shafiur Rahman said: “These events are almost just as busy as this one. Obviously, with the recent increase in misrepresentations of Islam, it has made the atmosphere more critical and these events are more important than ever. Curiosity [about the religion] is definitely raised because of the media. It’s one of the best methods for dialogue because it’s personal, face-to-face and opens up the doors of a sacred place.”
And East London Mosque’s open day wasn’t merely providing a different perspective of Islam than what many of the general public encounter. A few explored the religion in more depth to expand their knowledge such as the concept of ihsan. Many others took advantage of the day for interfaith dialogue, exploring the connections with the other Abrahamic religions.
Mark Tittle had come with his family after hearing about it on the morning of the open day. He said: “I’m an atheist, but my wife is Jewish and so is my daughter as the religion is passed down from the mother’s side.
“I’ve never been to a mosque but I’m interested in breaking down barriers between religions and social groups. My perception of Muslims hasn’t changed because of visiting today – I’ve always seen Muslims as ordinary people.”