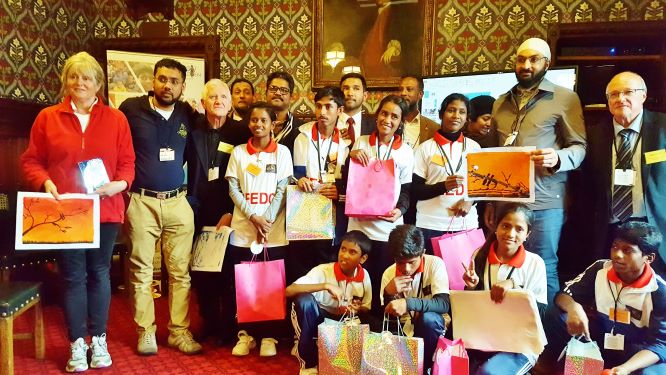 Everyone has dream in life but sometimes it is tough due to life‘s circumstance. According to UN sources, there are up to 150 million street children in the world today who for one or many reason spend most of their lives on the streets and an estimated 4 million street children in Bangladesh. There are many boys like Nizam and many girls like Sopna who has dream but no platform to build up their dream. Because they had no shade on head, no place to keep in safe and no school to study for a better future. They were in the street in Dhaka, the capital of Bangladesh. They were experiencing exploitation and abuse in Dhaka at the railway, bus station, factory and in domestic service.
They had a story to become a street child. They were abounded by parents, family. They were innocent child so they don’t know how to keep themselves safe & save. And it puts their life in danger. They became abused many ways. But they were rescued by LEEDO, a Dhaka based charity, who provides help and support with home, education and health service. With help of LEEDO, today a number of street children walk on towards their dream in life. Former 8 street children, 4 boys and 4 girls have represented Bangladesh in The Street Child Cricket World Cup 2019 in the UK.

But it was never ease for them to come a long way from Dhaka’s Street to Lord’s, the Home of Cricket. . They had an opportunity to join in The Street Child Cricket World Cup but they had no passport, no birth certificate etc. Most of them had no legal parents and documents to get service and travel to abroad. Because in Bangladesh it is never easy to get help for street children. But with the help of UK based charity, Friends of Street Children Bangladesh, those 8 former street children’s dream became true. They have raised funds to support the participation of children from LEEDO Peace Home in the Street Child Cricket World Cup. On 29TH April they arrived at Heathrow Airport, London to join the tournament. First day in the UK; they received a warm welcomed by Canary Wharf Group. They met with people from different profession and background. They shared their stories as a street child and performed show. They visited The Tower Hill Memorial, Tower Hamlets School, Trafalgar Square, and The Oval Cricket Ground.
Their first cricket match started at Parker’s Piece Cambridge on 4 & 5th May. In their first match they won against Mauritius by 17 runs and second match won against West Indies by 6 wickets. In the knock out rounds they also won against Nepal, Team India North and lost against England, Tanzania. On 7th May at Lord’s Cricket Ground, Bangladesh lost the Semi-final match to Team India South who became the winner of The Street Child Cricket World Cup 2019. End of the tournament, they had attended the closing programme at Lord’s where they were welcomed by John Wroe, Street Child United Co-Founder and CEO. They also met with Former British Prime minister Sir John Major, the patron of The Street Child Cricket World Cup and Ex England Cricketer Monty Panesar, the ambassador of The Street Child Cricket World Cup.
The last day in the UK, 9th May; Team Bangladesh had a unique, fun cricket game with The British MPs. The match was organisedby the All Party Parliamentary Group at Victoria Tower Garden, right next to the British House of Parliament. Even Team Bangladesh won their last match against The British MPs by 43 runs. After the cricket match Team Bangladesh attends at a reception party hosted by Mrs Anne Main MP, Chair of the All Party Parliamentary Group on Bangladesh. Rushanara Ali MP, Vice-chair of the All Party Parliamentary Group on Bangladesh, Jim Fitzpatrick MP, Paul Scully MP and The Hon High Commissioner of Bangladesh Sadia Muna Tasneem had attended to inspire and appreciate the Team Bangladesh for their achievement. 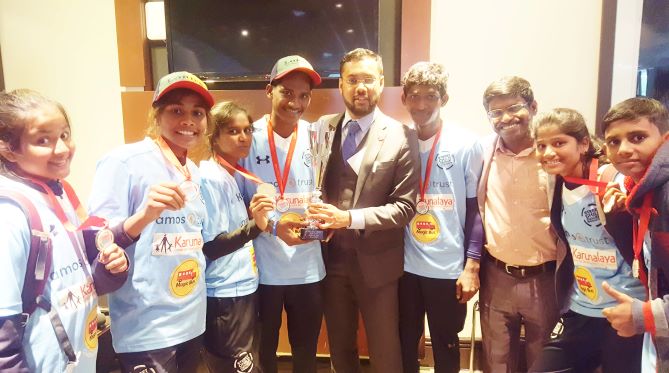 Mrs Anne Main MP said, I am delighted to be involved with Team Bangladesh who was street children. But today they participated in Street Child Cricket World Cup. They have difficulties in their life but our society should come forward to help them; to make their dream true. They have rights like everyone as a human and from the All Party Parliamentary Group, we will support them.
The Patron of The Street Child Cricket World Cup, Sir John Major said, What better place to demonstrate our commitment to improving the circumstance of these street children than the world famous cathedral of cricket, Lord’s. The momentous act of playing there is a powerful symbol of the importance of the message the young people will deliver their Cricket World Cup and will be heard across the world.
The ambassador of The Street Child Cricket World Cup Monty Panesar said, We are fortunate in the UK where children get rights but we should not forget those children who are abused and fighting for their rights. It is a great effort to bring them from all over the world to share and play cricket in one cricket pitch. Cricket makes us united. I hope, we will work for the street children to make their life better and secure. I think cricket is a powerful toll and you can see how this charity is helping kids get off the streets globally. I want no child to be living on the streets anywhere in the world.
The ambassador of The Street Child Cricket World Cup Ex Srilankan Cricketer Kumar Sangakkara said, Sport has the power to bring nations together; it is truly a force for unity. That is why I am supporting the Street Child Cricket World Cup 2019, using our shared passion for cricket to enable some of the world’s most disadvantaged and marginalised children to show their talents, make their voice heard and celebrate potential of every child, no matter their background.
The Co-Founder and CEO of The Street Child United, Mr John Wroe said, These are the most vulnerable children in the whole world. One of the main aims of the Street Child United is to tackle the widespread stigma and negative treatment that street children face every day and to put pressure on communities, governments to protect the rights of vulnerable kids.. Without birth certificate, without passport and without visas, they are not able to do anything. But the Street Child Cricket World Cup helped them to get their identity as a citizen of their country and encouraged them to shine in their life because they are most talented.
The Chair of Friends of Street Children Bangladesh, Mr Mike Sherriff said, I am really happy today to see the street children from Bangladesh to Lord’s in England. They had no family; even most of them don’t know who are their parents. They were abused and tortured in various places in Dhaka. Sometimes they used for crime and drugs. They live on the street and suffered with health, mental issues. In Bangladesh it is very difficult to help and raise them in safe and healthy environment due to lack of support and facilities. But Friends of Street Children Bangladesh is co-operating with LEEDO to help street children in Dhaka.

The Executive Director of LEEDO in Bangladesh, Mr Forhad Hossain said, We have a Peace Home where we look after more 50 children who were rescued from capital city Dhaka’s street. They have no one so we became their legal guardian. The Bangladesh Government ratified the UN Convention on the Right of the Child but they should ensure it is fully implementedfor children on the street. Because they are the most vulnerable who has no support or safety. But they have potentiality to make a huge impact in the society like other children if they will get support. So we should care and respect all street children.
The Selector of ICC Cricket World Cup Cricketeers& London Olympic Ambassador, Mfa Zaman said, These street children are an inspiration to those who has a dream. They were in the street and had no family but nothing can stop them to chase their dream. Once a time I was homeless and vulnerable in the UK so I know and can feel their pain and sadness so I have joined with them to encourage them to go ahead. There are millions of street children all over the world and they became a victim of abuse & crime. Because they have no support and guidance. They just do it to save their life. They are simply innocent so as a human we must save those valuable lives because they have rights to lead a good life like others. The government and community should care and keep them in a safe place to protect which would help to raise them in life. And cricket is able to create a strongbond and opportunity for those vulnerable children. Today these street children are in The Street Child Cricket World Cup because they got support to make their dream true. So if we will carry on support then they will make a change in this world.
There are 4 boys Md Nizam Hussain, Abul Kashem, Md Rubel Hussain, Rasel Islam Rumel and 4 girls Sopna Akter, Jesmin Akter, Sania Mirza, Arju Rahman who is the part of Bangladesh Street Children Cricket’s team. They are so excited to come in the UK to play The Street Child Cricket World Cup. Md Nizam Hussain said, I have no parents and was in the street. I was badly abused by others. Since I am in LEEDO, I started a good life and got my identity. I want to study at a higher level and established in life. When I came to the Street Child Cricket World Cup, I realised why it is so important to have legal identity. Without a legal identity, I have no rights as a citizen of Bangladesh but I born in Bangladesh. So I need care and love from people in Bangladesh. We want rights of every street children who will get education, housing, health support and a safe life.
Sopna Akter said, In age of 12 my parents forced me to get married due to poverty and I run away from family. I had no knowledge what is marriage but knew it is not good. Because I am a child and want to study. I was in the street in Dhaka where I was badly abused. But today I am in LEEDO care home. Now I am studying college and want to be a doctor. I request to the Government of Bangladesh, please give all rights to the street children, take action to stop becoming a street children and make a new law to stop all marriage for young people under age of 18. Every child deserves a beautiful life even they are in Bangladesh or where ever.
There are 8 cricket team has participated in the Street Child Cricket World Cup 2019, They are Team England, Team Bangladesh, Team West Indies, Team Tanzania, Team Mauritius, Team Nepal, Team India North and Team India South. At final Team England played against Team India South. The captain of Team England Jasmin who born in a Bangladeshi refugee camp. She came to Bolton, UK 10 years ago after her Rohingya family had fled the bloodshed in Myanmar. She lost her father 3 months after she was born. Jasmin said, I am a quiet person because of my past life experience I have had. But since I came in the UK, it has helped me to shine and given confidence to speak about myself. We want the Government to hear us, give us the rights and opportunity to lead a better life.