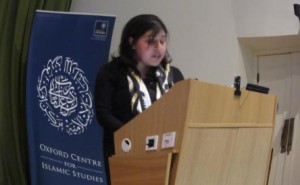 Baroness Sayeeda Warsi, Senior State Minister, Foreign & Commonwealth Office (FCO) disclosed recently that the UK Coalition Government has established Islamic Finance Task Force. She said, “I am proud to say that the Coalition Government agrees by establishing the UK’s first ever ministerial-led Islamic Finance Task Force, with the ministerial clout of several departments. It is jointly chaired by me at the Foreign Office and Greg Clark, the Financial Secretary to the Treasury.”

UK Islamic Finance Task Force
Baroness Warsi was delivering a lecture on “The Future of Islamic Finance in a Global Economy” organised by the Oxford Centre for Islamic Studies (OXCIS), Oxford, held at Taylor Institution, Oxford, on Thursday, 6th of June, 2013.

Baroness Warsi mentioned, it is supported by Alan Duncan at the Department from International Development; Lord Green at the Department for Business; David Willetts the Universities and Skills Minister; and Lord Deighton, the Commercial Secretary to the Treasury.  That’s six Ministers looking to build upon London’s status as a centre for Islamic Finance.

Baroness Warsi recently visited Malaysia and Indonesia and became aware of the potential of Islamic finance. Baroness Warsi said, “Globally the market has grown 50 per cent faster than the traditional banking sector. Sharia compliant assets rose by more than 160 per cent between 2009 and 2011. And Islamic Finance investments are now already worth $1.8 trillion dollars – with the industry forecasting this to grow to $2.5 trillion by 2015.

In Britain, there are great examples of this sector’s successes. Baroness Warsi mentioned, “More than a dozen banks in London delivering Islamic finance transactions, five of which are stand alone Sharia-compliant.”

About the rapid rise of this Islamic Finance industry in London, Baroness Warsi  mentioned, “London’s skyline has been transformed by Sharia deals – the Shard, Chelsea Barracks, Harrods, Olympic Village, all financed in whole or in part by Islamic Finance. Each of these is a powerful symbol of the sector’s rapid rise and a daily reminder of the importance of engaging with potentially lucrative new markets in the Muslim world and beyond. “

9th World Islamic Economic Forum in the UK
Baroness Warsi also said, to further cement our world-leader status, London has been chosen to host the 9th World Islamic Economic Forum in October – the first time it’s been held outside the Muslim world. “This rapid increase is, for me, something to celebrate and something to build upon,” Baroness Warsi said.

Baroness Warsi also said what this coalition government is doing to continue moving us in the right direction. She started by giving three reasons why, more than ever, the time is right for Islamic finance. First and foremost, she said, “Economic power is shifting to the east, to China and to India, and also to the burgeoning middle classes in the Middle East and South East Asia. Britain, and British businesses of all sizes, can no longer afford to ignore new and emerging markets. We need to demonstrate to the world that UK is a first class destination for foreign investment and commerce – to show that Britain is open for business. London is sending that message out loud and clear.”

Baroness Warsi also said, “We are facing increased competition from Dubai, New York and Hong Kong, as well as future regional hubs, such as Nigeria, in its bid to become an African financial capital. We must constantly be striving for more, and Islamic finance provides one area where development is possible.

Ethical Finance
Secondly, Baroness Warsi mentioned about ethical finance. She said ethics and business are not adversaries; in the long run they need each other. She cited examples of how people are seeking investments that comply with their philosophy and beliefs. Baroness Warsi mentioned, “Since it adopted it ethical policy in 1992 the Cooperative bank has turned away loan applications worth a reported £900million. We are seeing the effects of this trend across the world. In Turkey the value of assets held by Participation banks, those whose practices are structured in accordance with Islamic law, has increased by 1000 per cent in a decade. The share of these banks has increased from 2% a decade ago to 6%, and the Turkish government is looking to increase this to 15 per cent over the next decade.”

“In America, Sabbath economics, which employ the principles of the Biblical Sabbath and focus on the redistribution of wealth, are thriving. With the simple intention of countering the ‘Wall Street economics’ of getting the greatest possible return, this model aims to do the greatest possible good and getting a decent return in the process,” she said.

Baroness Warsi argued, “With Qard Hassan, the good or benevolent loan, Islamic finance aims to establish a caring society, mobilise wealth, encourage good deeds and help those in need. And that’s something I would like to call on all Islamic banks, indeed all banks, to work to achieve.”

“So Islamic Finance could be a sensible, measured banking option, at a time when confidence remains low and the Government is working with the G8 to improve the transparency of financial institutions,” said Baroness Warsi.

We need to balance and diversify
our economy, says Baroness Warsi
Baroness Warsi argued, “This is the third reason why Islamic finance is an important option because we cannot simply carry on as before. We need to rebalance and diversify our economy. We need to consolidate and protect our existing position. We need to engage with new markets, products and regions. To go beyond the borders of the EU and our traditional trading partners and to connect with the increasingly global economy. But just as we need to re-balance the nation’s economy to promote stability and resilience, we should encourage individual sectors to diversify. And again, there is a place here for Islamic finance.”

Baroness Warsi mentioned about removing barriers and supporting the market-driven growth and innovation. She said, “With a specific aim to maintain a favourable tax and regulatory framework for Islamic Finance to give London a competitive edge, building on what the UK has already done with Islamic mortgages and the tax system to ensure Sukuk are not penalised.”

We are looking at alternative finance schemes
“So we are looking at alternative finance schemes like Murabahas and Wakalas to give students the option to have their student loans financed in a Sharia-compliant way. And with Green Deal providers we are exploring ways to make the Green Deal available under Sharia principles. In each case, we will consider how to overcome the tax and legislative barriers to them. By working with the industry, we will support it in its aim to broaden the range of products and services, reducing the risk of over-exposure and ensuring that high quality Islamic alternatives are available to customers,” Baroness Warsi mentioned.

Speaking about the role of the Islamic Finance Taskforce, Baroness Warsi mentioned, “The Task Force will consider what role the UK can play in establishing these global standards, and whether financial ratings agencies can adequately reflect the unique characteristics of Islamic institutions. The fourth work stream is looking at ways of promoting and exporting UK Islamic Finance education, training and research expertise.”

Baroness Warsi also mentioned how the Islamic Finance can feed into the UK’s foreign policy objectives. She said the post -Arab Spring countries are currently undertaking political and economic transition. “The governments of the region are promoting Islamic finance, and as a result growth in the sector is expected be significant and could mean that the regional industry is six times larger in 2015 than it was in 2010.”

Baroness Warsi argued, “There is an opportunity for the UK, and the Islamic finance sector in particular, to support this process by providing the expertise, financial innovation and services that this developing industry needs to grow. Supporting economic transition in the region in a tangible and proactive way. Helping these countries to overcome the challenging economic problems that they face.

Baroness Warsi championing Islamic Finance
Toward the end of her speech, Baroness Warsi said, “Islamic finance has a potential market base of more than two billion people, notwithstanding those drawn by ethical, not religious considerations. In the wake of the financial crisis, the principles upon which Islamic finance are based seem more important, more attractive, than ever before. Principles of balance; shared risk; fairness; due diligence; oversight and transparency. Principles that prevent you from selling what you don’t own or attaching a value to assets that do not exist.”

Baroness Warsi acknowledged, “Of course, there are ongoing conflicting interpretations of what activities are Sharia compliant, which can and do themselves create investor uncertainty.” But at the same time, she argued, “the sector is still developing: the revival of Islamic finance is only 50 years old, whereas conventional banks have been around for 500 years.”

“Modern Islamic Finance is, after all, in relative terms, at the beginning its life cycle. So although it is something that brings immense opportunities – it also has its challenges,” Baroness Warsi mentioned.

Concluding her speech, Baroness Warsi said, “The Government’s role is to create the regulatory and tax frameworks to allow the market to thrive, and, ultimately, help to produce the growth that Britain needs. And by championing Islamic finance I believe we are doing just that.”