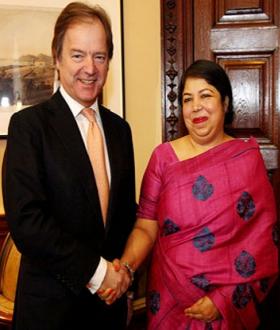 The UK Minister of State at the Foreign and Commonwealth Office Hugo Swire today called on Speaker and Executive Committee Chairperson of Commonwealth Parliamentary Association (CPA) Dr Shirin Sharmin Chaudhury in London today.
During the meeting, they discussed on various matters related to bilateral issues and mutual interest, a Parliamentary Secretariat press release said here.
Terming the UK as an old friend of Bangladesh, the Speaker said there are still ample opportunities to further increase the bilateral relations between the two countries.
The Speaker expressed her satisfaction over the excellent bilateral cooperation between Dhaka and London and hoped that the friendly relations between Bangladesh and the UK will be further strengthened in the days to come.
Dr Chaudhury also put emphasis on strengthening role of CPA and commonwealth for contributing more to the development of democracy of both the countries.
The British minister assured that the UK will continue its cooperation to Bangladesh for the country’s socio-economic development.