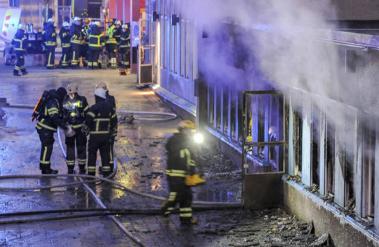 An arsonist set fire to a mosque in the Swedish town of Eskilstuna yesterday, injuring five people, police said.
About 15 to 20 people were attending dhuhr salat in the mosque, located in the ground floor of a residential building, when the fire broke out on Christmas day.
Local media footage showed smoke and flames coming from the windows before firefighters put the fire out.
The incident comes amid a fierce debate in Sweden over immigration policies.
The far right wants to cut the number of asylum seekers allowed into Sweden by 90%, while mainstream parties are intent on preserving the country’s liberal policy.
“A witness saw somebody throw an object through the window of the building, which serves as a mosque, after which a violent fire began,” police spokesman Lars Franzell told reporters.
He said five people were taken to hospital for treatment of injuries ranging from smoke inhalation to lacerations.
Police are treating the incident as arson but no arrests have been made so far, Mr Franzell added.
Eskilstuna, which has a large immigrant population, was the scene of clashes involving neo-Nazi groups opposed to Sweden’s immigration policy earlier this year.
Earliers this month, the Sweden Democrats – a populist party with a strongly anti-immigration agenda – brought down the minority governing coalition after it had been in power for just two-and-a-half months, by refusing to support its budget plans.