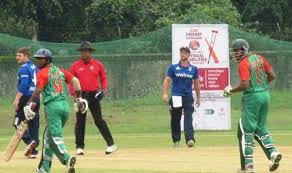 Bangladesh has started their campaign of ICRC T20 Cricket Tournament for the physically challenged beating England by 14 runs at Bangladesh Krira Shikkha Protishtan (BKSP).
In the opening match on Friday, the host side dominated opponent England and snatched their first victory of the tournament.
Bangladesh won the toss and opted to bat first. They put a target of 118 runs for eight ahead of England and later dismissed England for 103-7.
The tie between Bangladesh and England was scheduled to kick off on Wednesday but as rain played the spoilsport, the fixtures had to be revised and Bangladesh vs England match was announced to be held on Friday.
According to the new schedule, two matches will be held every day from Friday to Wednesday.
Earlier on Wednesday, Prime Minister Sheikh Hasina inaugurated the tournament at the Sher-e-Bangla National Cricket Stadium.