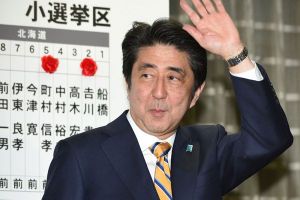 Japanese Prime Minister Shinzo Abe’s ruling coalition cruised to a big election win on Sunday, but feeble turnout could weaken his claim of a mandate for policies including reflationary steps to revive the economy.
Most media exit polls showed Abe’s Liberal Democratic Party and its junior partner, the Komeito party, winning more than 317 seats in the 475-member lower house, enough to maintain its “super-majority” that smoothes parliamentary business.
But many voters, doubtful both of the premier’s “Abenomics” strategy to end deflation and generate growth and the opposition’s ability to come up with a better plan, stayed at home, putting turnout on track for a record low, interim figures showed.
Turnout had already hit a post-war record low of 59.3 percent in the 2012 poll that returned Abe to power for a rare second term on pledges to reboot an economy plagued by deflation and an ageing, shrinking population.
Hopes for Abe’s “Three Arrows” of hyper-easy monetary policy, government spending and reforms such as deregulation were tarnished after the economy slipped into recession in the third quarter following an April sales tax rise. Recent data suggest any rebound is fragile.
Abe decided last month to put off a second tax hike to 10 percent until April 2017, raising concerns about how Japan will curb its huge public debt, the worst among advanced nations.
“I worry that Japan’s public finances will get even worse,” said 38-year-old Tokyo voter Akihiro Fujihara.
“I wish there was a party out there that would come up with actual proposals to make Japan a better place to live.”