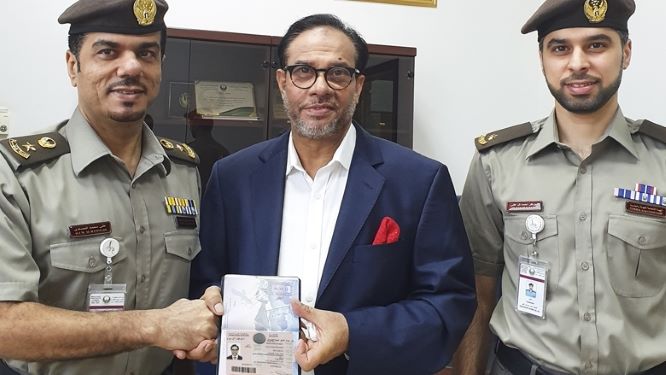 In a statement issued by the company, the recognition comes as Al Haramain Group celebrates 38 years of its presence in the UAE.

Rahman is involved in a broad range of business and trade ventures around the world – with diversified business interests in perfumery, banking, healthcare, education tea, and hospitality, etc.

“The Golden Visa is an honour for me and my country Bangladesh. This will encourage us to investment more in to the UAE economy and help the UAE economy expand more. We are grateful to the leadership and people of the UAE for allowing us great economic opportunity and honour,” he added.

The group owns more than 20 business establishments across the GCC, Bangladesh, Malaysia, the United Kingdom, United States and other countries with more than 100 branches directly employing more than 1,000 professionals and employees.

A seasoned banker, Rahman is is the current Chairman of NRB Bank Ltd – one of the three lenders allocated for Non-Resident Bangladeshis (NRBs).

Hailing from a traditional family in Sylhet, Bangladesh, Mahtabur Rahman was born in 1958 and completed his education in Sylhet city. After that, he joined his family business in Saudi Arabia, which was running well in Makkah since 1970.

After foreseeing the potential Fragrance Markets in the GCC and the Middle East and North Africa region, he moved his entire operation and manufacturing units to the UAE and built the modern and well equipped Head Office fitted with ORACLE-ERP Server in an area of 33,000 square feet and also established a factory in the UAE over an area of around 180,000 square feet, which grew into a state-of-the-art manufacturing unit.

“It was around 1992-93, that I was looking for a piece of land to develop a perfume factory. I was offered the land by His Highness Shaikh Humaid bin Rashid Al Nuaimi, Member of the Supreme Council and Ruler of Ajman, in the new industrial area in Ajman. I found the place empty with nothing but sand.

“We continued to grow our business and it kept multiplying every few years. We have so far invested more than Dh100 million in our factory in Ajman.”

In 2011, he founded Bangladesh Business Council in Dubai – the only registered business group for Bangladeshi business community to help strengthen bilateral economic relations between Bangladesh and the UAE. He supports educational and charitable institutions in Bangladesh.