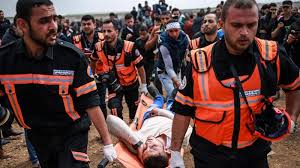 At least 15 Palestinians have been killed and more than 1,400 others wounded by Israeli forces as thousands marched near Gaza’s border with Israel in a major demonstration marking the 42nd anniversary of Land Day.
Mohammed Najjar, 25, was shot in the stomach in a clash east of Jabalia in the northern Gaza Strip, while Mahmoud Muammar, 38, and Mohammed Abu Omar, 22, were both shot dead in Rafah, the Palestinian health ministry said in a statement on Friday.
The other 11 victims were identified as Ahmed Odeh, 19, Jihad Freneh, 33, Mahmoud Saadi Rahmi, 33, Abdelfattah Abdelnabi, 22, Ibrahim Abu Shaar, 20, Abdelqader al-Hawajiri, Sari Abu Odeh, Hamdan Abu Amsheh, Jihad Abu Jamous, Bader al-Sabbagh and Naji Abu Hjair, whose ages remain unknown.
Earlier on Friday, Omar Waheed Abu Samour, a farmer from Gaza, was also killed by Israeli artillery fire while standing in his land near Khan Younis, just hours before the demonstrations.
There has been no confirmation from the Israeli army of the attack that killed Samour.
More than 1,400 others were also wounded after Israeli forces fired live ammunition at protesters and used tear gas to push them back from a heavily fortified fence, according to the Palestinian Ministry of Health.
According to the ministry, the majority were injured in live fire, rubber-coated steel bullets and tear gas inhalation.
Protesters in Gaza gathered in five different spots along the border, originally positioned about 700 metres away from the fence.
Adalah, a legal centre for Palestinian rights in Israel, condemned the Israeli forces’ use of force, calling it a violation of international law.
“Live gunfire on unarmed civilians constitutes a brutal violation of the international legal obligation to distinguish between civilians and combatants,” the group said in a statement.
It also said that it would launch an investigation to “demand that those found responsible for the killings be brought to justice”.
Friday’s demonstration commemorates Land Day, which marks the day – March 30, 1976 – when six unarmed Palestinian citizens of Israel were killed by Israeli forces during protests against the Israeli government’s decision to expropriate massive tracts of Palestinian land.
Protesters said the main message of the march was to call for the right of return for Palestinian refugees.