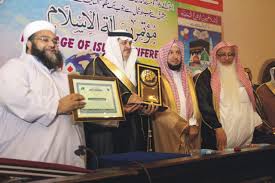 A group of religious scholars in Pakistan have declared King Salman the “Islamic World’s Personality of the Year 2017,” in recognition of his services to the Muslim world, especially to Palestine.
The scholars gathered in Lahore to participate in the International Paigham-e-Islam Conference (Message of Islam Conference) organized on Monday by the Pakistan Ulema Council (PUC).
The event was chaired by PUC President Maulana Hafiz Tahir Ashrafi and attended by Saudi Ministry of Religious Affairs Secretary Talal Al-Aqeel as chief guest.
The Saudi Ambassador to Pakistan, Nawaf Saeed Ahmad Al-Maliki, was also in attendance.
The participants of the conference expressed deep appreciation for the role played by King Salman in uniting the Muslim Ummah and raising his voice for its rights at every international forum.
King Salman’s Islamic World’s Personality of the Year Award was received on his behalf by the Saudi ambassador.
During the course of the conference, the participants fully endorsed the decision of the 29th Arab League Summit and rejected US decision to move the American Embassy to Jerusalem. They unanimously declared that the US decision was not acceptable to anyone among the Muslim countries.
“The only solution to the issue is the establishment of an independent Palestinian state that has its capital in Jerusalem. No other solution can bring peace to the region,” said the resolution adopted by the conference.
The participants also noted that Muslims of the world were facing significant challenges due to the menace of extremism, terrorism and sectarianism.
Many of them stated that the enemies of Islam were benefiting from these differences that had fragmented Muslim communities all over the world. They also noted that after destroying Iraq, Syria, Libya and Yemen, such elements were also planning to turn on, and destablize, Saudi Arabia.
The conference participants expressed their concern over missile attacks on Saudi Arabia by the Houthis, saying no Muslim would tolerate an attack on Islam’s holiest cities and that the UN Security Council should take note of those who were supporting the Houthis.
“No one can afford the destabilization of Saudi Arabia, and Iran should not support the Houthis. The world should take notice of excesses committed by Houthis,” Hafiz Tahir Ashrafi, president of the PUC, said while addressing the gathering.
Speaking on the occasion, the Saudi ambassador thanked the conference for declaring King Salman the Islamic World’s Personality of the Year.
“The Saudi government is always ready to serve the people of Pakistan. The two countries are tied by the bonds of friendship and Saudi Arabia values Pakistan’s feelings for the Kingdom,” he said.
The conference also lauded the Pakistan Army for providing training facilities to Saudi forces.
“The Pakistan Army, being the force of a nuclear country, has the responsibility of ensuring the safety of all Muslim countries. It should fully cooperate with the Saudi armed forces by providing them consultation and training to meet the challenges of terrorism from external forces,” another resolution passed by the conference read.