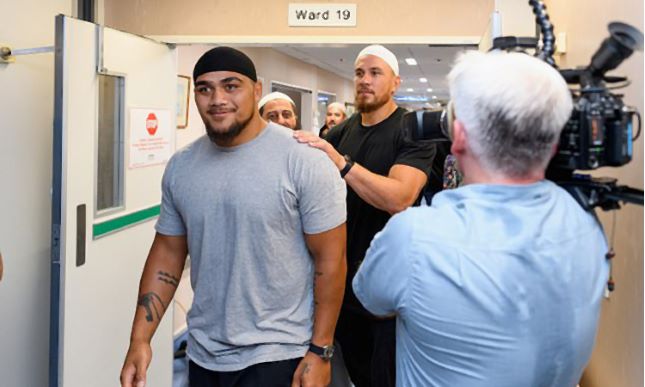 The All Blacks rugby player Ofa Tu’ungafasi has accepted Islam following a visit with his Muslim teammate Sonny Bill Williams over the weekend to the survivors of Christchurch mosque terrorist attack.

“Allahu akbar today Sonny Bill William’s mother and his teammate Offa Tuungafasi accepted Islam. May Allah make it easy for them and grant them firdous ameen. Podcast coming soon inshallah,” John Fontain wrote on Twitter on Tuesday. The All Blacks player is originally from Tonga.

Tu’ungafasi and Williams spent time with some of the mass shooting victims at Christchurch Hospital Friday, shaking hands, posing for selfies, and offering words of comfort. Tu’ungafasi described survivors as an inspiration and prayed for their speedy recovery.

“Verily, with every hardship comes ease. Had the most amazing experience visiting the Muslim Brothers in hospital on the weekend. Am inspired and have drawn so much strength from you all. May the Almighty bless you all with quick recovery. Love and Duas,” he wrote.
Sonny Bill Williams converted to Islam in 2008 after attending prayer services at a Sydney mosque.

In New Zealand, Islam is a minority religious affiliation, as small numbers of Muslim immigrants from South Asia and eastern Europe settled starting from the early 1900s until the 1960s. The south-pacific island country of New Zealand is home to 36,000 Muslims, according to the 2006 census.