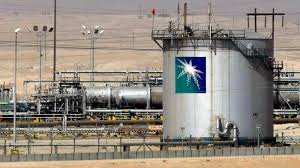 Saudi Aramco will sign eight deals worth $10 billion with French firms on Tuesday, the chief executive of the state-run oil giant said on Monday — the main contracts expected to be sealed during Crown Prince Mohammed bin Salman’s visit to France.
The crown prince, who is behind modernizing reforms in Saudi Arabia, is on a three-day trip.
Amin Nasser told Saudi-run Al-Arabiya TV on Monday that his company would finalize the accords on Tuesday. A Saudi-France economic forum is due to take place on Tuesday with an official signing ceremony in the afternoon.
Aramco and French oil major Total plan to sign an agreement to expand their joint venture refinery in Saudi Arabia, according to sources familiar with the matter.
Total declined to comment and Aramco did not immediately respond to a request for comment.
The prince is not due to sign mega-contracts in France as he did in the United States and Britain in the past month. A French presidency statement said the two leaders would work on a strategic document that would lead to contracts by the year’s end, when Macron travels to Saudi Arabia.