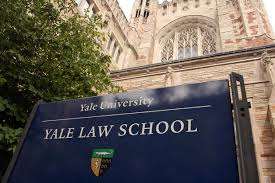 A $10 million gift from a Saudi businessman will establish a center for the study of Islamic law at Yale Law School.
Abdallah S. Kamel, chief executive of the Dallah Albaraka Group banking and real estate enterprise in Saudi Arabia, made the award after meetings with university representatives including Yale President Peter Salovey.
Yale officials say the Abdallah S. Kamel Center for the Study of Islamic Law and Civilization reflects a growing interest at Yale and other institutions in Islamic law, history and culture.
Professor Anthony Kronman, a co-director of the center, said Yale aims to have the best program of its kind in the United States.
For two decades, Harvard Law School has had its own Islamic legal studies program, established with support from the Saudi king.