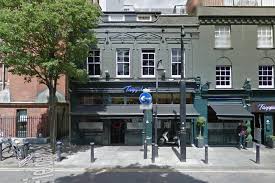 One of London’s top curry houses was temporarily shut by officials for allegedly employing illegal workers.
Family-owned Punjabi restaurant Tayyabs, in Whitechapel, has been closed since Tuesday after being raided by immigration officers last week.
The East End institution, where queues are common for fans of their tandoori lamb chops, opened in 1972 and boasts actress Christina Hendricks and retail expert Mary Portas among its celebrity supporters.
Following a raid by the Home Office’s Immigration Enforcement agency, it was alleged that some of the 40 staff at the award-winning eatery were working illegally or lacking correct permits.
Of nine offenders that have been identified, five Pakistani nationals are being deported, the Home Office said.
A spokesman added that the eatery already owes fines of £95,000, while the latest notice to be served carries fines of up to £180,000.
The restaurant responded with a note which read: “As you are aware our restaurant has been issued with a closure notice. We are working hard to resolve this matter.
“We hope to open by Thursday 31st August. Sorry for the inconvenience.” -Evening Standard