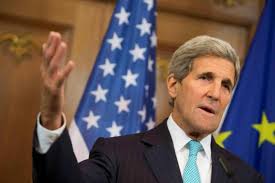 The United States will increase the number of refugees it takes in by 15,000 over each of the next two years, bringing the total to 100,000 by 2017, U.S. Secretary of State John Kerry said after talks with his German counterpart on Sunday.
The remarks may show increasing U.S. willingness to help cope with the mass migration of Syrians although the offer is modest when compared with the hundreds of thousands that are moving to Europe and in particular, Germany.
Kerry did not say how many of the additional refugees would be from Syria but pledged that the United States was ready to help.
“In consultation with Congress, we will continue to explore ways to increase those figures while maintaining robust security,” Kerry told a news conference after meeting German foreign minister Frank-Walter Steinmeier.
“The need is enormous, but we are determined to answer the call.”
Kerry also announced he will hold talks on the sidelines of the U.N. General Assembly in New York this week on ways to restart negotiations on a political solution to end Syria’s war.
“We have agreed on certain formats and processes by which we should try and proceed,” he said, adding that he would meet with Russian Foreign Minister Sergei Lavrov and Iranian Foreign Minister Mohammad Javad Zarif to discuss the situation in Syria.
Kerry’s comments on refugees address calls on U.S. President Barack Obama to help more in the crisis. Obama has said the U.S. will accept at least 10,000 Syrians over the coming year displaced by the four-year-old civil war.
His announcement comes ahead of a Sept. 23 emergency summit meeting of European Union leaders to address the stream of refugees that has overwhelmed the region.
He said the United States would like to take in more refugees in the coming year but needed additional funding from Congress to hire more people to process the refugees.
Countries disagree as to who should take responsibility for the nearly 500,000 people who have crossed the Mediterranean into Europe this year alone, prompting Hungary’s use of water cannon and razor wire on its border with Serbia.
Many of the same fears shape the debate in Europe as in the United States, where the number of refugees allowed in slowed sharply after the attacks on Sept. 11, 2001.
Some Republicans have warned that the administration could open the door to potential militants.
Aid groups, meanwhile, have been critical of plans to allow in only 10,000 Syrians, given the large size of the American economy and population. They have called for ten times as many to be admitted.
Kerry has pushed for renewed efforts to find a political solution to the crisis and urged Russia and Iran, who back Syrian President Bashar al-Assad, to convince him to negotiate an end to the war. -Reuters