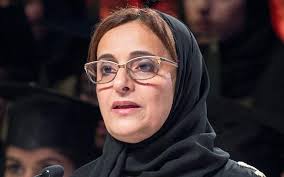 Shaikha Lubna bint Khalid Al Qasimi, Minister of International Cooperation and Development (MICAD), has been ranked 42 among the 100 most powerful women in the world, according to the Forbes, an American business magazine owned by Forbes, Inc.
The magazine announced that Shaikha Lubna stood first among the most powerful women in the Arab countries for the year 2015. She ranked 55 in 2014 and 67 in the year 2013.
The magazine writes that as Minister of International Cooperation and Development, Shaikha Lubna has led the United Arab Emirates into an unprecedented amount of philanthropy.  The oil-rich country contributed $5.4 billion to foreign nations in 2013, a steep climb from the $1.6 billion donated in 2012, giving more than any other nation at a rate of 1.3 per cent of the country’s income.
Shaikha Lubna has also contributed to charities in her own time, volunteering with Friends of Cancer Patients Society and serving on the Board of Directors for the Dubai Autism Centre. In 2004, she became the first woman in the country’s history to assume a cabinet position when she was appointed as Minister of Foreign Trade.